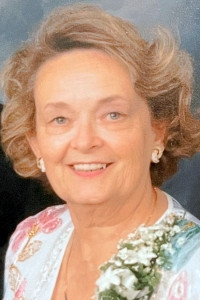 VerDonna “Donna” Mae Emery Van Liere, 88, died on December 27, 2021 of Alzheimer’s disease in the memory care unit at the Peaceful Pines Senior Living Center in Rapid City, SD.
Donna was born on December 2, 1933 in Colton, SD, to Wayne and Kathryn (Skrovig) Emery.
In 1951, she graduated from Colton High School. Donna graduated from South Dakota State University in 1954. While in college, she was a member of a singing group, a committee focused on scholarship programs for women, and participated in Hobo Days activities. After college, Donna taught home economics at Colton High School, which she really enjoyed.
On October 5, 1956, Donna married her high school sweetheart, Don Van Liere. They had been married for 60 years when Don passed away in 2016. Donna raised four children and her brother, Robert Emery, who joined the family as a young boy. Besides raising a family, Donna has assisted her husband in their businesses as an administrator / accountant for many years. In 1959 they moved to Brookings and in 1976 the family moved to Rapid City. Donna enjoyed exploring the Black Hills, gardening, bowling, golfing, and boating. Donna enjoyed a slow boat ride to Poinsett Lake and Pactola Lake although Don liked a faster ride! She was a member of the “Z Club” which was a regular social gathering of her girlfriends and on occasion the group included their husbands. Donna’s real passion was her love of entertaining family and friends.
She was known for her cooking and baking skills, her ability to create beautifully decorated homes, and her hospitality in general. She was also an active member of PEO, a national non-profit organization dedicated to educational opportunities for women.
While residing in the memory care unit, Donna was fortunate enough to be cared for by a group of people who not only called her grandmother, but loved her like a member of their own family. Even though she had lost the ability to speak, they still knew what she wanted or needed. We would like to thank them for the continued and compassionate care they provided not only to Donna, but also to her family and other residents.
Donna was a devoted wife, mother, grandmother and friend.
She was predeceased by her husband, Don; his sister, Elaine Wieman; sister and brother-in-law, Evelyn and James Edwards, and brother-in-law, Raymond Van Liere.
Donna is survived by her brother, Robert Emery; children, Victoria (Tim) Sweeney, Todd Van Liere, Tim Van Liere and Marci (Mark) Bachman; sister-in-law, Marilyn Van Liere; brother and sister-in-law, Merle and Bette Van Liere; grandchildren, Ryan Sweeney, Mitchell Bachman, Clayton Van Liere, Cordell Van Liere and Vincent Van Liere; daughter-in-law Rebekkah Van Liere; and many nieces and nephews.
In lieu of flowers, memorials can be made at the Alzheimer’s Association at 225 North Michigan Avenue, Floor 17, Chicago, IL, 60601, or Black Hills Works, 514 Mt. Rushmore Road, Rapid City, SD, 57701. Black Hills Works is an organization that serves adults with disabilities, including Donna’s oldest grandson.
The funeral will be at 2 p.m. on Friday January 7, 2022 at Kirk Funeral Home.
Visits will take place one hour before services. Private family burial will follow. Masks are encouraged at funerals and the live broadcast of the service will be available at www.kirkfuneralhome.com.