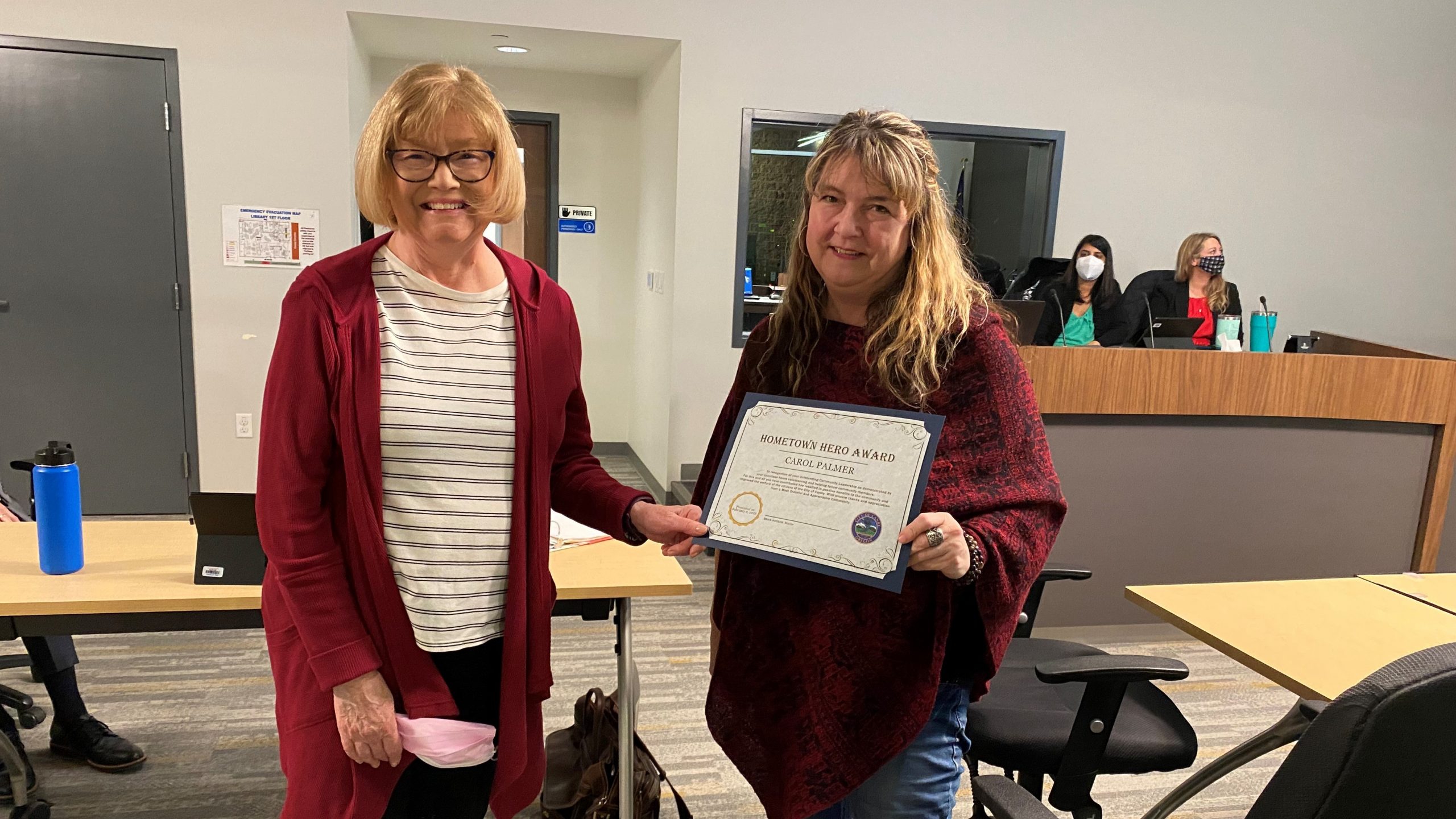 Board Chair Traci Hensley presented Palmer with the Hometown Hero Award in recognition of his outstanding community leadership, as evidenced by his countless hours of volunteering and helping others in the community.

Palmer was a longtime member and chairman of the city’s Heritage and Monuments Committee, as well as the Canby Library Council.

Stickel spent nearly a decade working on various projects with Palmer, with whom she said she formed an “unlikely team.”

She became emotional as she described one of her favorite memories, introducing Palmer at the 2018 inauguration of Canby’s Women’s Heritage Trail, the state’s first trail entirely dedicated to women’s endeavors.

The event was spoken by former Gov. Barbara Roberts, the first woman to hold Oregon’s highest office – but it was not the high point for Stickel.

“Looking back on that day, my thoughts are not with Governor Barbara Roberts or being part of a project that was the first in the state…but being able to feature Carol Palmer,” he said. she declared.

“I used the quote, ‘Here are the strong women. May we know them; may we be them; may we lift them up. So thank you for allowing me to be part of a wonderful evening to honor someone who is a strong woman in my life.

Judi Jarosh, one of Palmer’s proteges and successors as HLC president, spoke of the “many visible things in the city that Carol led or pushed.”

Jarosh called Palmer an “ambassador” for Canby and single-handedly responsible for tens of thousands of dollars in grants funneled into the community for various heritage, cultural and preservation projects over the years.

“Before I got involved with the Heritage and Monuments Commission, I had never even seen a grant application,” Jarosh said. “But Carol taught me how to write them and then guided me along the way.”

Peggy Sigler also offered congratulations and thanked Carol for “revitalizing the historic review board.” She noted that Carol was continually working on historic preservation efforts.

For his part, Palmer paid tribute to city staff, past and present, including Stickel, Director of Public Works Jerry Nelzen and former city recorder Kim Scheafer, and other HLC volunteers, including Kelly Harms, Jennifer Giller and Tony Crawford.

“It’s amazing and actually kind of wonderful to get an award for something you really love doing,” she said with a laugh. “It’s like chocolate on chocolate. … It was really a pleasure for me to do all this.

Help us build a sustainable news organization to serve Canby for generations to come! Let us know if you can support our efforts to expand our operations and keep all of our content paywall-free. #SwimWithTheCurrent!