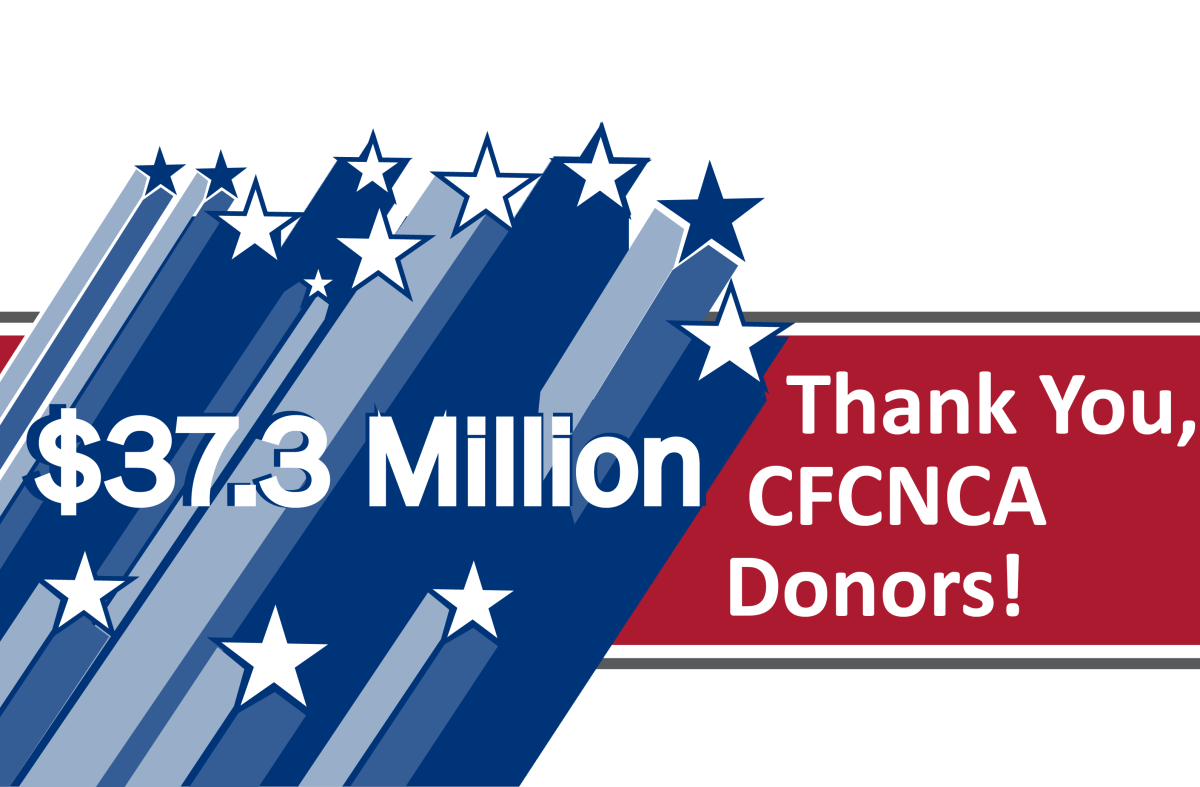 Federal employees and retirees have pledged more than $37.3 million and 42,800 volunteer hours

Celebration of $37.3 million raised in the CFCNCA

Although a few pledges remain outstanding, the current total stands at over $37.3 million. The amount raised exceeds the goal of $35 million and the amount raised in the 2020 CFCNCA. In addition, more than 42,800 volunteer hours were pledged to CFC participating charities.

“We are so proud that the federal community is standing up to support our local, national and international neighbors,” said Vince Micone, CFCNCA Co-Chair. “The contributions through the CFC exemplify the dedication to public service that is so characteristic of federal employees. Pledges of financial and volunteer support will make a difference in the lives of others.

Federal employees and retirees honored sixty years of CFC impact with a commitment of $60 or 60 minutes of volunteer activities as part of the Do 60, give 60 movement. The historic campaign was established by President Kennedy via executive order in the spring of 1961.

Ann Van Houten, Co-Chair, said, “These donations will be paramount in overcoming the obstacles we faced in 2021 and will help us overcome the unforeseen challenges that lie ahead in 2022. The beauty of CFC has always been its flexibility in terms of of donations. – once, or throughout the year, coupled with charitable monitoring and donation management. CFC charities can count on stable income throughout the year, plan ahead and prioritize their CFC funds so they do the most good. This freedom is what makes being part of CFC so special and rewarding. »

Through February 28, 2022, the Office of Personnel Management has opened the charitable application system and is currently accepting applications from 501(c)(3) nonprofit organizations to be part of the 2022 campaign. interested charities can view the announcement note, access training resources, and read application tips at GiveCFC.org.

The CFCNCA will organize a final and an awards ceremony after the confirmation of the final contribution amounts. The efforts of federal departments and agencies will be recognized, participating charitable groups will perform and offer thank you notes, leaders will share their thoughts and CFC heroes will be identified during the event. For more information and to stay up to date with the CFCNCA and the upcoming 2022 campaign, visit CFCNCA.GiveCFC.org.

“We wholeheartedly thank everyone for their contributions to those in need and to the causes that matter most to each of us through CFC 2021,” Micone said. “What we learn every year from CFC is how we can rely on our community to always lend a hand to those we know and others we may never meet – because that’s how much they care about our nation and the world.”

The Combined Federal Campaign (CFC), overseen by the Office of Personnel Management, is one of the largest and most successful annual charitable giving campaigns in the world, with 36 CFC zones across the country and in overseas, raising millions of dollars every year. With more than $8.5 billion raised since 1961, the 2021 campaign commemorates 60 years of giving from the federal community. The Combined Federal Campaign for the National Capital Region (CFCNCA) is the local campaign for federal employees and retirees in the Washington metropolitan area and surrounding areas. For more information, visit CFCNCA.GiveCFC.org. Connect to the campaign via Facebook, Twitter, instagram, and LinkedIn.