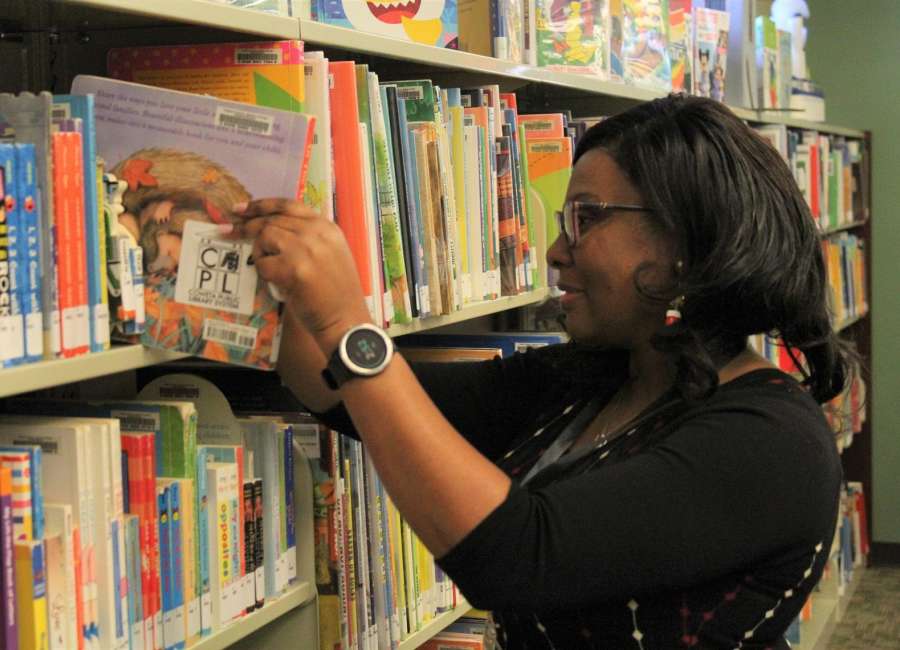 Join one of the Facebook groups for Grantville residents and you might find a video of Kristen Hayes Timoteo reading aloud.

Timoteo is the Branch Manager for the Grantville and Senoia locations of the Coweta Public Library System. She was promoted to this position in August, after working in the library system for about 13 years.

Timoteo said these videos and social media engagement are all part of an effort to attract more Grantville residents to the library.

“If you’re not in their face, they’ll forget we’re here,” she said.

Jimmy Bass, director of CPLS, described Timoteo as “a real hustler” and said his social media engagement helped people get in.

“It’s one of Kristen’s most powerful tools in the bag,” he said of Timoteo’s use of social media. “With social media, she digs. With Grantville, it’s true that it’s our smallest library and the hardest to reach sometimes, and it’s the hardest to get our name out there to people. It worked for her.”

While the central library branch has a steady flow of books, Bass said smaller library branches, like Grantville and Senoia, rely on programs to get people to visit the libraries.

When people attend the programs, they often consult a book as well.

“It allowed him to stay in touch with people who would be involved in the programming,” Bass said. “For Grantville and Senoia, (the programs) really draw people in. When those people come to meetings and programs, they walk away with a handful of books.”

Timoteo has also created a “vending machine” that people can access when borrowing books.

If a customer borrows 10 books, she said they can get a free snack or item from the vending machine.

“If we don’t have programs, customers don’t just come here,” Timoteo said. “It’s a small investment to get people in.”

Despite appearing in social media posts, Timoteo said she’s actually a “very shy person” and would rather be on the sidelines.

Eventually, she plans to hand over content creation to someone else, but kept it as her duty since other staff members shunned it.

Timoteo said she consults with her teenage daughter before creating the videos she posts online.

Her daughter, along with her friends from East Coweta High School, come up with ideas for the librarian to use, Timoteo said. The only stipulation is that they must be book or library themed.

“I’m really not good at social media,” she said. “So she teaches me. She wants me to get a Tik Tok account.”

Currently, the videos are only posted to Facebook groups for Grantville residents to connect with each other.

But, Timoteo said she plans to create a Tik Tok account for herself to promote library activities.

“A staff at first, but then I’ll start putting things in there from the library,” she said.

Since she started posting the videos, Timoteo said more kids want to be part of the story time videos.

So once February rolls around, she said she wants to do a series of story hours that are “14 Days of Love” for Valentine’s Day.

The Grantville branch of the library system has historically had the lowest circulation count of Coweta libraries, Timoteo said.

The number of books borrowed is comparable to branch revenue, she said, and the figures are submitted to the state for funding.

With the numbers rising in response to his social media posts, Timoteo aims to keep the library’s attendance and circulation growing.

“The main number that they care about the most is the number of articles circulating,” she said. “So my goal is to get us back in the running.”