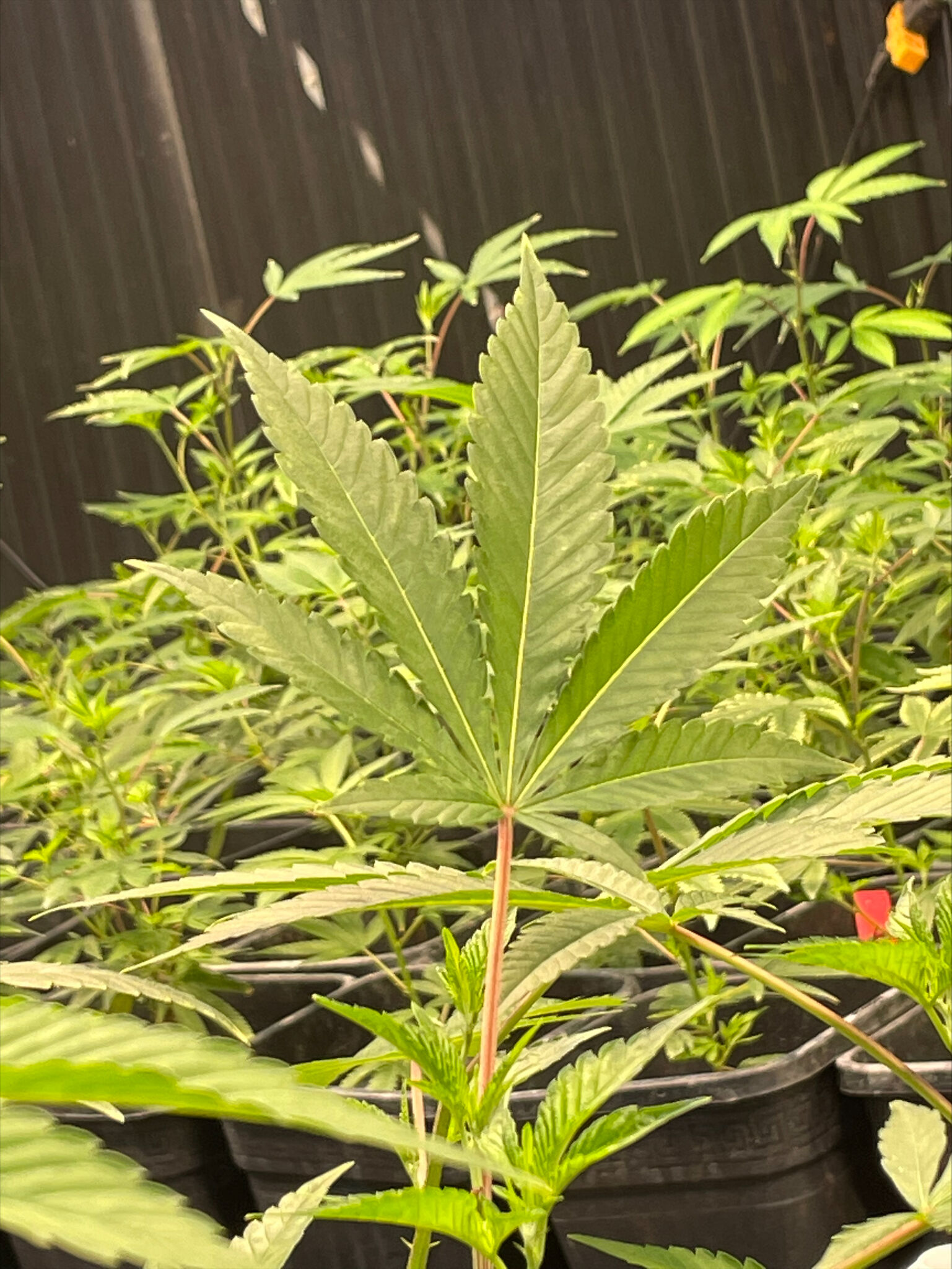 Since then, the price of hemp has collapsed. This, in turn, has reduced the number of hemp growers in Connecticut from a high of 140 in 2020 to about half now.

“A lot of people went into it thinking it would be a cash crop,” Goetsch said. “There is definitely an oversupply of hemp for CBD.”

Goetsch, like many hemp growers, thought she would dive into the recreational cannabis market, but ultimately decided against it.

“I was so disgusted with the lottery system,” she said. “I decided that my time, energy and money could be better spent as an advocate for hemp farmers.”

Companies growing THC-laden marijuana for medical purposes have received preferential treatment, she said, and she thinks existing hemp growers should benefit as well.

“It just seems fair to me that they left out this whole community of people who have dedicated four years now to perfecting the craft,” she said.

The law that legalizes the recreational use of cannabis by adults provides for the creation of a hemp task force, the purpose of which, according to an analysis by the Office of Legislative Research, is to investigate “how Neighboring states have integrated hemp and its products”. and producers in their recreational cannabis programs, laws, and regulations,” and to consider “possible legislation to incorporate hemp and its products and licensed producers into Connecticut’s recreational cannabis laws.”

Goetsch and another hemp grower, Brant Smith, were named in this group. It was supposed to meet earlier this year, they said, but has yet to meet.

“The way the bill is written, everything was supposed to happen within 30 days of the law coming into effect,” Goetsch said. “But here we are a few months later, and we haven’t even had our first meeting.”

It’s not a new idea. Other states have included hemp growers in their adult-use cannabis rollout.

“We are already growing cannabis,” Smith said. New York State has already done this. I mean, it’s not like it would break new territory.

According to Goetsch and Smith, there are compelling reasons to allow hemp growers to grow THC-laden cannabis. The first is the farmers’ existing knowledge base and infrastructure.

“They call medical marijuana growers ‘legacy growers,’ but so are hemp growers,” Goetsch said. “We grow cannabis, it’s the same techniques you need to grow marijuana. We have honed our skills, we have built our facilities and our and our and our capabilities.

Retail sales of recreational cannabis are supposed to start by the end of this year, but Smith, a Cheshire hemp farmer, said he doubted growers were ready.

“I don’t see how they can supply a state of three and a half million people at a level close to demand,” he said.

Medical producers must continue to develop for the medical market, and it will take time for any new producer to catch up.

“Once you get your installation and you have your license, you have to develop it, and that takes about six months,” Smith said. “So I don’t believe they’ll have marijuana in the timeframe they’re talking about.”

Allowing hemp growers to switch to marijuana “would get marijuana to market faster,” he said. “Because we already have the capabilities, the technology and the know-how to develop it because we are developing it.”

“We have about 47 farmers in the state of Connecticut that we support today,” he said. “We help them grow hemp. We help them extract and then we help them make products. We help them build the brand.

New farmers, he said, will find it difficult to catch up.

“Quite frankly, the fact is that these new cannabis growers have no idea what they’re doing,” he said. “One of the biggest problems is mould. One of the biggest issues are the products themselves and the conditions, bugs, plastic, other things that have been found in these products. We know how to do this correctly. We have been doing this since 2018. We can wake up tomorrow with a quality product grown organically, because the Ministry of Agriculture requires us to grow organically.

A new and struggling industry

Smith also started growing soon after Connecticut passed its own version of the Farm Bill.

“As soon as it became legal in Connecticut, I started growing,” he said.

In Connecticut, hemp farms are still largely owned by local owners, but elsewhere in the country big corporations have started to rush in and buy up local farms so they can operate at scale.

That, and what some believe is an oversaturation of CBD products, has caused the value of a bushel of hemp to plummet, putting many Connecticut hemp growers out of business.

Smith said that when he started growing hemp, he was able to sell it for $500 a pound. The price has dropped significantly since then, but cannabis for adult use sells closer to $3,000 a pound wholesale.

This is why they had hoped to enjoy grandfathering as cannabis cultivators when the state began considering legal recreational use.

Meanwhile, the state’s four licensed medical marijuana producers are multi-state operators, which have had a head start when it comes to selecting growers for recreational cannabis licenses.

There is a lottery process to determine growers for the state’s future recreational market, but, as the state’s Consumer Protection Department said in January, “currently licensed medical marijuana growers who convert to enter the adult cannabis market” are “not subject to the lottery process.

“To be honest, I’m struggling to break even,” Smith said. “You have this fledgling industry in Connecticut that is sinking, while the recreational marijuana side is basically out to multi-state operators.”

Smith owns acres of hemp greenhouses in Cheshire. It sells a few brands of CBD products, salves, and the like, but primarily sells cut hemp in bulk.

CBD won’t get you high, but it is used as a sleep aid, muscle relaxant in ointments, and for other medicinal purposes.

The hemp he grows is low in THC, the substance in marijuana that gets you high. In fact, the Agriculture Improvement Act of 2018 specifies that each plant must contain less than 0.03% THC.

“If there is more than that, it is technically a marijuana plant, and therefore must be destroyed or must be repaired,” he said.

“People involved in hemp know that,” he said. “Honestly, there are many places in the world where the threshold is 1%, which makes sense to me, because you can’t get high on a plant that’s less than 1%.”

But the chemical composition of a cannabis plant is not so binary. It’s not just about THC and CBD.

“There’s also something called THC-A in a plant, which is basically what will turn into THC if you burn it,” Smith said. “Federal law doesn’t take that into account at all.”

The Connecticut regulations that legalized the production and sale of hemp, however, take THC-A into account. To determine legal levels of THC-A, they take the amount of the chemical in a dried plant, multiply it by 0.84, and then add it to the amount of THC.

Smith grows plants with CBD, but because of regulations, he relies on plants high in another chemical, called CBG.

“It’s called the master cannabinoid,” he said. “This cannabinoid doesn’t have THC because all other cannabinoids come from it. So there’s no THC or CBD. So we’re able to develop that.

If you want to get the most out of it, “the best and most effective CBD is what we call full spectrum, where CBD is the main cannabinoid, but there are also many other cannabinoids, including THC. , and they all work together,” Smith said.
The fact that all of these chemicals come from different strains of the same plant, but hemp growers have been left out of the cannabis growing process is what bothers Goodenough.

“There are 140 molecules in this plant. I can’t grow one. I can grow 139. But I can’t grow one,” he said. “The objective is to be able to integrate into the whole market. Why am I ripping the diamonds out of my pile of potential opportunities? »