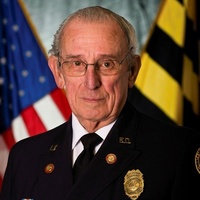 Benjamin KENNEDY Abell, Jr., 93 of Leonardtown, MD, passed away peacefully on February 14, 2022 at Georgetown University Hospital with his loving family by his side. Born October 1, 1928 in Sparks, MD, he was the son of the late B. Kennedy and Adelaide Maria (Lynch) Abell. He was the youngest of five children and was predeceased by his siblings Enoch Booth (EB) Abell, Mary Jane Scully, Robert Peery Abell and Thomas Lynch Abell.

Kennedy married the love of his life, Elizabeth Ann Lacey on February 14, 1953. He was devoted to Ann and has missed her every day since she left on January 19, 2005. Their romance began with dances in Medley’s Neck and spanned five wonderful decades. Those lucky enough to hang out with Kennedy know that their romance didn’t end there. Even in his absence, not a moment passed that his dear Ann was not in his thoughts. Saddened as his family had to say goodbye, they find comfort in knowing that he has reunited with his beloved Ann on their 69th wedding anniversary – a long-awaited dance in their sentimental journey.

Kennedy was a permanent resident of Leonardtown, MD. He graduated from Margaret Brent High School, followed by an additional year of business studies at St. Mary’s Academy. He began his banking career at County Trust Bank (Maryland National Bank) in 1947, joined Tri-County Savings and Loan (Community Bank of the Chesapeake) in 1986 and retired at age 70. years.

Kennedy was a committed pillar of the Leonardtown community and demonstrated this through his dedicated involvement in various service organizations. He joined the Leonardtown Volunteer Fire Department (LVFD) in 1944 at the age of 16 and has been a member for the past 77 years with 45 years of active service. During his time with the fire department, he held every executive and operational position within the organization, including LVFD Chief (1955-1956) and LVFD Chairman (1968-1976). Additionally, Kennedy served as vice president (1958-1959) and president (1960) of the Southern Maryland Volunteer Firemen’s Association (SMVFA). His dedication and leadership to the fire community led to him being inducted into the SMVFA Hall of Fame in 1987. The LVFD voted unanimously to dedicate their Squad 1 to him for his commitment and service to the Department and the community it serves in 2020.

Kennedy served in the Maryland National Guard for 3 years (1953-1956) and became a platoon sergeant. He became a member of the St. Mary’s County School Board in 1962 and served two 5-year terms. He was a monarch member of the Leonardtown Lions Club, where he also won the title of Melvin Jones Fellow and the 2008 Lion of the Year award. He was an active participant in the St. Mary’s County Historical Society, and was considered a an invaluable resource to many because of his intimate knowledge of the history of Leonardtown and the county.

Kennedy never met a stranger in this community and was always happiest in a room full of people. As devoted to Leonardtown as Kennedy was, he was above all the patriarch of the family. There was not a single occasion involving his family that he would miss. Whether it was family dinners, birthdays, graduations, weddings, reunions, sideline sporting events, or a family member setup, Kennedy was the first to go. present to support his family, children and grandchildren. He was a beloved husband, father, grandfather and friend. He adored and cherished every moment surrounded by his family and friends. The Abell family thanks everyone who shared special moments in their life. He loved you all so much and treasured his time with each of you.

The family will receive friends for the Celebration of Kennedy’s Life on Friday, February 25, 2022 at 10:00 a.m. at St. Aloysius Catholic Church, 22800 Washington Street, Leonardtown, MD 20650. A Lion’s Club presentation and firefighter prayers will be held at 11:30 a.m. am A Christian burial mass will be celebrated at 12 p.m. by Reverend David Beaubien and Reverend Rory Conley. Interment will follow immediately at St. Aloysius Cemetery.