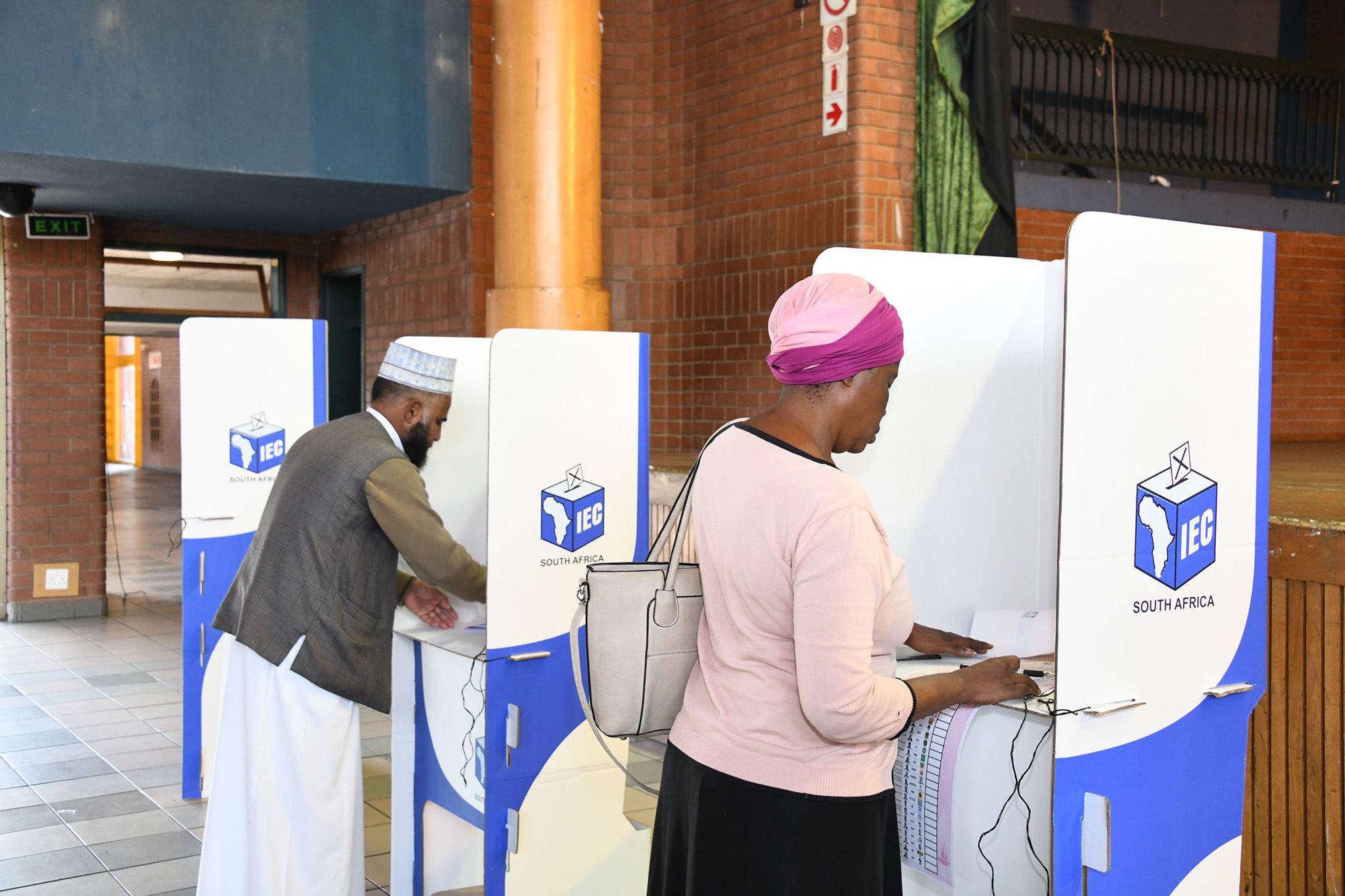 Social media has become an important political battleground, a battleground where lies do damage in the real world. University of Cape Town (UCT) Graduate School of Business (GSB) based group works to advocate for democracy in South Africa online by tackling disinformation head-on, by polarizing rhetoric and hate speech.

The advent of social media brought new hope for politics: that it would usher in an era of direct democracy where citizens could come together in virtual town halls – spaces where all were equal – to debate politics and demand accounts to politicians.

That hope was never quite realized, and what the world is experiencing instead is the manipulation of social media tools to advance particular agendas. Agendas that often go against the good of democracy and society. The Center for Analytics and Behavioral Change (CABC), an organization incubated in UCT GSB, strives to intervene in this space, going beyond research to combat disinformation – lies purposefully constructed to advance a particular program – polarizing rhetoric and hate speech where it occurs.

â€œSocial media has enormous potential,â€ says Stuart Jones, CABC Project Director. â€œAnd this potential has at times been tapped by broad-based anti-authoritarian movements, such as the Arab Spring of 2010 and the more recent pro-democracy protests in Hong Kong. ”

But the same tools can and are used undemocratically to foster social division.

Social networks: a tool for populists and demagogues

For a case study on the dangerous use of social media, you don’t need to look any further than the 2016 United States (US) election and the campaign of former President Donald Trump. , which relied heavily on targeted social media advertising.

â€œTens of millions of dollars have been spent micro-targeting particular personality types on social media,â€ says Jones. â€œThe nature of these platforms means that it is no longer necessary for a campaigning politician to have distinct political positions, instead, they can come up with several related political positions for different audiences because you can target them separately. “

This strategy has been replicated by demagogues and populists around the world. He forever changed the way power is contested, especially in democracies.

Another change brought about by social media is to provide space for political interference from outside forces, especially undemocratic ones.

It also happened in the 2016 US election, which saw Russian interference: the strategy was to deliberately polarize the electorate, seeking to radicalize the right and undermine Democratic Party candidate Hillary Clinton.

Closer to home, South Africa has also seen outside interference: the 2016 Bell Pottinger scandal revealed that UK-based public relations firm Bell Pottinger had been employed by the Gupta family to hijack the attention to their corruption and misdeeds by igniting hatred and sowing dissent in South Africa through social media.

In response to this growing undemocratic trend on social media, the CABC launched a project called DemocracyYethuKaofela (SeSotho for “democracy: it takes us all”). This large-scale project, in collaboration with DefendOurDemocracy and other activist groups, includes research and analysis, as well as a response team of content creators and dialogue facilitators, who strive to fight against dangerous and inaccurate narratives. This involves a multi-pronged strategy of interacting with certain accounts, reporting those that spread hate speech or incite violence, and counter disinformation with the truth.

â€œWhat we tend to see on social media in South Africa is narrative manipulation and large-scale social division,â€ says Jones. South Africans got a taste of the potential damage from divisive and inflammatory rhetoric in July of this year, when rampant looting, property destruction and rampant violence erupted in key hot spots across the country in response to the arrest of former President Jacob Zuma for contempt of court.

â€œOur team was closely monitoring the conversation leading up to Zuma’s arrest,â€ Jones explains. “So we had already established a number of accounts that manipulated the narrative.”

But, on July 9, 2021, civil unrest is accompanied by a massive increase in inflammatory content online. The CABC team followed the relevant hashtags and noted that over a million related tweets were posted within four days. To contextualize this, hashtags and tracked search terms were used a few hundred times a day in preparation for Zuma’s arrest – then between 8e and the 15e July were used between 110,000 and 310,000 times per day.

â€œWhile this was going on, we had our dialogue facilitators online, trying to calm things down. We have also reported the inflammatory accounts to Twitter to shut them down, through Media Monitoring Africa’s Real411,” he says.

In the aftermath of the insurgency, the CABC began to unpack what had happened and reported the main stories behind the violence to the media and the government. He published a report on the 12 main accounts, who tweeted between 900 and 1,600 tweets per day. An account, when active, tweeted on average every 45 seconds. To put it in perspective, the global standard is that 72 tweets per day (one every ten minutes for twelve hours straight) are considered suspicious, and over 144 tweets per day are highly suspicious.

â€œThese were booster accounts that retweeted content from content generator accounts. Jones said. “As a result, when you walked into that social media space, you were faced with a wall of very similar content that made it seem like this rhetoric was the sum of the conversation.”

This is, he says, a classic tactic of organized networks that conduct these kinds of social divisive campaigns on social networks.

â€œWe live in a very unequal society, a society of terrible poverty and injustice. These conditions make it very easy to divide us.

Since then, most of these incendiary accounts have been closed, and the South African Police Department has charged some of those responsible for these accounts. The OACC also deployed approximately 80 volunteer dialogue facilitators to respond to the nefarious misinformation that has spread and to change the nature of the conversation.

â€œOnce we come in and start asking questions and talking, others often join us,â€ he continues. â€œOthers, who were too afraid to speak, feel empowered. It helps shift the conversation to more constructive spaces.

â€œWe have seen a dramatic change. It’s much calmer and more constructive, and we think our work played a role in that.

With the announcement of the 2021 municipal elections for South Africa later this year, the CABC is already responding to misinformation and dangerous rhetoric on social media.

“This is particularly relevant in these elections because municipal battles are much smaller than national and provincial, and a few thousand votes can make all the difference for small parties.”

Jones says they started to see xenophobic sentiment stirred up by smaller parties. Other contentious and dangerous topics include attacks on the justice system and the rule of law.

Some of these attacks aim to undermine the organizations that run the elections so that parties can later label them as unfair.

â€œThere are forces that are trying to undermine our democracy,â€ Jones says. â€œForces that want to cling to power at all costs and, frankly, not to go to jail at all costs. And the cost of that may well be our democracy. That is why we have to be really vigilant and defend it.

The additional goals of DemocracyYethuKaofela are to encourage people to get involved in their democracy and to raise awareness of what it means to live in a constitutional democracy. The team hopes that better understanding could make people more resilient to the misinformation and social division that exists on social media.

â€œWe live in a very unequal society, a society of terrible poverty and injustice,â€ says Jones.

â€œThese conditions make it very easy to divide us. So, without hiding the cracks, we seek to talk about what democracy means and why it is important, so that we can fight against those who will use divisions for their own personal and often profiteer agendas. “