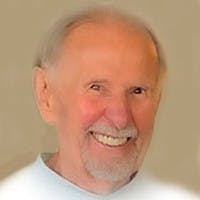 Dawe, Frank R. Age 84, of Plymouth, passed away peacefully in his sleep on November 22, 2021. Preceded by Joan, his beloved wife of 56 years, his brother James (Bonnie) and his parents (Laura, Rand, and Wally), and is survived by daughter Heather (Bruce), son Fred (Kathya), brothers Larry and John (Shirley and Jonathon), other relatives and friends. Frank will be remembered as Joan’s devoted husband and a loving father to Heather and Fred. Frank was known as a man with a big heart, with integrity and honesty, as someone who enjoyed interacting with people tremendously, who always stopped to say hello to someone he recognized, always able to remember his. name and personal details. He had a wry sense of humor, was tough but fair, fiercely competitive, and greatly appreciated any opportunity to negotiate. Frank was a romantic, who brought Joan a flower every morning, served her coffee and breakfast, and expressed his creative side by designing her jewelry. He has strongly supported education and entrepreneurs, giving generously for scholarships as needed. Legacy of his years as a newspaper delivery man, Frank loved to start the day before dawn, even jogging on overseas business trips and greeting late night latecomers with his trademark wave, only later to share the stories of her morning sightings in cities around the world. In retirement, Frank resorted to an early swim, opening the Lafayette or Miramar even before the staff arrived. At home, at the cottage in Wisconsin, Florida, or visiting Toronto, Frank’s joy was spending time with family and friends, whether it was playing tennis, reading, fishing. , to play nickel poker, to have an ice cream or to prepare an incredible Sunday breakfast. He enjoyed cycling with Heather, Fred, with the Geezers Bike Club, and was proud to have completed the MS 150 six times. Born in Toronto to Newfoundland parents, the third of four boys who lost their young father and were raised by a mother who has always found a way to support herself, unwavering in her commitment to family, teaching her sons real responsibility and always asking guests if they want a second plate. Frank attended North Toronto Collegiate Institute, where he played soccer and basketball, and made lasting friendships with a group of guys who stayed in touch throughout all phases of life. Frank attended the University of Toronto, where he met Joan and became a member of the Zeta Psi fraternity, never forgetting the secret handshake. He still worked, delivered newspapers year round, and had summer jobs in building construction, uranium mining, or as an apprentice chef at the Banff Springs Hotel, where he had met Marilyn Monroe. Frank began his professional career at State Farm Insurance, then, taking a risk in the new IT industry, at Control Data Corporation, eventually seizing the opportunity to move his family to the world headquarters in Minnesota for a two-year assignment, and is rest. Frank has worked as a senior executive in human resources and administration throughout his career and, after CDC, got a call from Elizabeth Dole, who asked him to work on a key national human resources project. for the American Red Cross, what Frank did with his and a deep sense of duty. After a full retirement, he reunited with other CDC co-authors and wrote â€œHR Pioneers: A History of Human Resource Innovations at Control Data Corporation,â€ successfully highlighting how to care for employees and community is an integral part of the best business. plan. Locally, Frank has served as chairman of the St. Paul Area Chamber of Commerce, the Minnesota Opera Board, as well as the boards of many other companies and organizations, including the University of Ottawa Industrial Relations Advisory Board. Minnesota and the Human Resources Roundtable Group. , Organizational Resources Advisors and the Decathlon Club. Frank loved investing in and mentoring companies, helping them build better organizations, as he was always striving to improve. Frank loved being part of large communities and first settled his family in Burnsville, residing 28 years in a special place called Walden. Frank then adopted the weekend cottage lifestyle in the island town of Cumberland, Wisconsin, home to Beaver Dam Lake, where Frank spent countless hours fishing. As he neared retirement, Frank and Joan became snowbirds in Barefoot Beach, Florida, which never took Frank more than two days of driving to reach or return, a record 22 years. Next came Pelican Point in Mound, another friendly island community where Frank re-established his summer headquarters and enjoyed boat cruises with Joan around Lake Minnetonka. After Joan passed away, Frank moved to “The Club” as he called it, Trillium Woods was his last residence where he enjoyed greeting neighbors and staff on the way to the pool or while having a bite to eat. at the Minnehaha Pub. Until his very last day, Frank sought to connect with people, stopping to shake hands and share a smile, sharing stories from his travels and giving life lessons. Frank loved to teach by example and gave his family every opportunity to discover the world. He was a humble man of great achievement, who took his life one day at a time. Please visit Frank’s Memorial page on KapalaGlodekMalone.com to view Frank’s Memorial video and share Frank memories with his family. Memorials requested from: Lewy Body Dementia Association: lbda.org/donate/ ~ Or ~ Mayo Clinic: philanthropy.mayoclinic.org/â€¦ Must choose “other” In “Other designation” – enter the gift option for the Lewy Body Dementia Research “Make This Donation A Tribute” Follow Other Directions

Our staff do not correct grammar or spelling. Faq