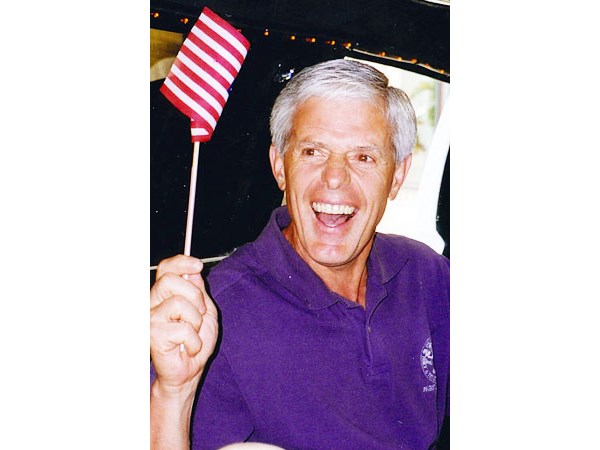 STOUGHTON – Glenn Dean McNaughton, 78, of Stoughton, beloved husband, father, friend, teacher and coach, crossed the finish line after an impressive time, Thursday, March 17, 2022. He was at home and surrounded by his family.

Glenn spent 35 years as a math teacher at Monona Grove and Stoughton High Schools, after short stints at Sturgeon Bay and Lincoln High School in Portland, OR. He was as passionate about mathematics as he was about the success of his students. Each student had his personal attention (he once described his job as involving 400,000 face-to-face meetings) and each understood that their success was his personal concern. In her class, students who had struggled with math found that everything made sense; those who had excelled in mathematics found an unexpected challenge. More than math, he taught the importance of learning and that achieving any goal makes you a little taller, a little prouder.

Early in his career at Monona he coached football, wrestling and tennis, but running was his passion and by 1976 he was head coach of the MG cross-country teams and assistant coach- course designer, John Klement. Working with the runners, he was instrumental in the 1982, 1984 and 1985 men’s state championships. track and field in the Monona Youth Summer Track Program and the Jaycee Regional Junior Track and Field Meet. He was a familiar face on the start line at WIAA State and Badger dual-track meets, where he worked as race director until his retirement.

Glenn was born to Raymond and Eula (Bushnell) McNaughton on November 7, 1943, the sixth of fourteen children. Raised on a modest farm near Eau Galle, WI, he learned at an early age to eat what he was served, milk his assigned cows, and run fast, because it was fun and he could.

While in Durand High School, he was a Mississippi Valley 1st Conference Football Team winner in his sophomore, junior, and senior years. He was a starting guard and one of the leading scorers on the 1960-61 Panthers basketball team, which missed the state tournament by one game. Later that spring, he ran the mile at the 1961 State Track and Field Meet, and his classmates voted him the school’s athlete of the year.

He graduated from Wisconsin State University at River Falls, majoring in mathematics. While there, he continued his exploits on the football field and on the track, sold tickets and concessions to the Falls Theater for Herb Stolzman, closed VFW’s All-You-Eat Chicken special while eating exactly what they offered, and built some of his most important friendships, still strong 60 years later. After graduating in 1965, he studied for a year at Florida State before taking his first teaching job at Sturgeon Bay High School.

Three years after meeting at a coed dance in River Falls, Glenn and Mary (Moberg) were married on December 23, 1967, in Rochester, MN. Their dedication to each other over the next 54 years is a story for the ages. Together they raised two children: Lance (Denis Lee), Madison and Amy (Tony) Ketterer, Stoughton. Growing up, when he was never in their father’s class, his two luckiest students could find him at the kitchen table to help with homework and life. Throughout his career, he has balanced full-time teaching, mentoring, and service to his Church and community, while being a present, supportive, and loving husband and father.

Glenn hosted dozens of McNaughton family get-togethers where golf, board games and precious family time were in abundance. He entertained his brothers with his math score games at the end of their annual winter golf getaways. He loved his sisters and worked alongside them on projects when he could. It was how he showed his love – he shared time with you in a shared space. He listened to you, he helped you and he taught you something.

Glenn was quietly proud of his meticulously manicured yard and impeccably shoveled sidewalks. When he was done with his, he would help you with yours. It was typical of his kindness and generosity. He was also very proud of his children’s success and was very proud of his marriage. He was deeply proud of the students he coached and taught. Hundreds, if not thousands of alumni were shaped by this gifted educator who loved helping others learn to stretch, succeed and believe in themselves.

Glenn was generous. He devoted countless hours of service to the Stoughton community after his retirement, founding the high school Key Club and volunteering for the Kiwanis Club, Stoughton Area Community Foundation, and the American Cancer Society Relay For Life. He forged friendships in every endeavor and his gregarious and charismatic personality will always be remembered.

Glenn was brave. It seemed he would never get enough of life. “Life is good,” he would say, even after ALS had taken its toll. But, when he had had enough of ALS, he said goodbye to those who survived him: his beautiful and devoted wife, Mary; and children: Lance, Denis, Amy and Tony. Glenn is also survived by his siblings: David (Julie), Robert (Ginny), Donald, Paul (Barb), Ardys (Marv Dunn), Michael (Jody), Christine (Karl Stewart), Mary (Rick Carr) and Karen (Andy Buvala); as well as sisters-in-law: Suzanne and Christine.

He was pursued into death by his parents, Raymond and Eula; brothers: William, James and Steven; sister, Joan McNaughton; and sisters-in-law: Yasuko, Gretchen and Susan.

His wife and children express their gratitude to the extended family members, countless friends, neighbors, community members and former colleagues and students who have made life better for Glenn and have supported him and us during last year with ALS. We also thank the caregivers at the Wisconsin ALS Association, UW Neuro-Muscular Department, and Agrace Hospice who facilitated her final months.

Visitation will be held at the Cress Center, 6021 University Avenue, Middleton, WI, from 11:00 a.m. to 1:00 p.m., Thursday, March 31. A memorial service will immediately follow onsite with Pastor Eric Carlson presiding, and a time for fellowship will follow the service. The service will be streamed live, please use this link: https://event.forgetmenotceremonies.com/ceremony (please complete the 2 step registration process, if you need assistance please call Cress at 608-238 -8406).

Always a teacher, Glenn taught us about both living well and dying well. To ensure that his love of teaching continues to help others, in lieu of flowers, we encourage donations in his memory to the Glenn D. McNaughton Teaching Scholarship at Monona Grove School District, 5301 Monona Drive, Monona, WI, 53716.

Glenn was a gentle, kind and gracious man. He left this world better than he found it. We will miss him so much and we are grateful for everything he taught us and for all the love he shared.

Please share your memories of Glenn by posting on his tribute wall at: www.CressFuneralService.com.