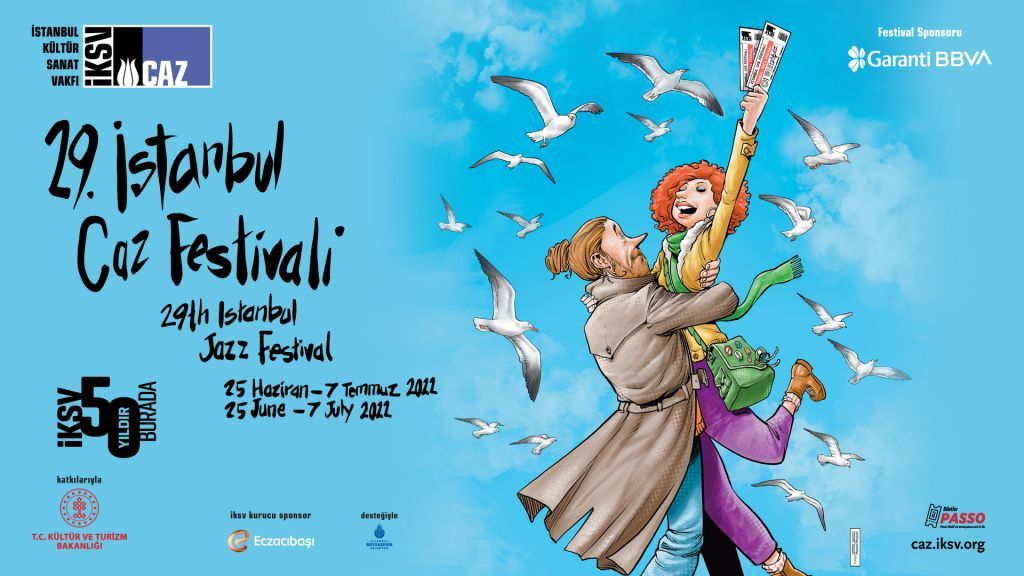 Music will reverberate throughout Istanbul during this year’s jazz festival. From Asia to Europe, from parks to market halls; the city is ready to welcome music lovers.

Organized by the Istanbul Foundation for Culture and Arts (İKSV) with the sponsorship of Garanti BBVA for 25 years, the Istanbul Jazz Festival opens its doors for the 29th time on June 25. This summer, the festival will bring together major jazz artists and contemporary music stars with music lovers in different locations in Istanbul.

Named after Esma Sultan, the daughter of the 32nd Ottoman ruler, Sultan Abdülaziz, the historic mansion has witnessed a number of historical events and figures over time. Marmara Esma Sultan’s Mansion now awaits for an exquisite night of music in its historic atmosphere. Opera Sureyya is another historic venue that will host the festival. The historic Kadıköy Opera House will open its doors for the 29th Istanbul Jazz Festival. Sultan Park-Swissôtel le Bosphore will also be one of the outdoor venues.

When it comes to music, two places come to mind for all the inhabitants of the city: Harbiye Open Air Theater and Cemal Reşit Rey Concert Hall. These two venues will host some of the festival’s most exciting and memorable events.

The stars of the festival

On the occasion of the 50th anniversary of Istanbul Foundation for Culture and Artsand the 29th anniversary of Istanbul Jazz Festival, one of the most eminent jazz singers in the world Dianne Reeves comes to Istanbul. The 5-time Grammy Award-winning singer is about to treat festival audiences to an exquisite musical evening. Reeves will be joined by extraordinary artists John Beasley, Romero Lubambo, Itaiguara Brandao and Terreon Ravine. Also joining Reeves on stage, the world renowned clarinet virtuoso Hüsnü Şenlendirici who is known for his interpretations of Roman melodies through the prism of pop, jazz and funk. This unique musical evening will take place in Open-air theater Harbiye Cemil Topuzluone of the places identified with Istanbul and the July 5 festival.

Gifted with a beautiful alto voice and great insight as a songwriter, Melody Gardot will take the stage at Open-air theater Harbiye Cemil Topuzlu July 7. Gardot possesses a blue, jazz-oriented style and dark personality that reflects not only her afflictions, but conversely the hope and joy of creating personalized music that marks her as an original.

The public is invited to a date with a living music legend John McLaughlin in Open-air theater Harbiye Cemil Topuzlu June 29. The artist introduced jazz and rock guitar to three different generations during his career, generously pushing the boundaries of music with his band, The 4th Dimension.

The best of Turkey

One of the most popular Turkish rock singers of the new millennium, Theoman is known for his lyrics, telling sometimes funny but mostly tragic, ordinary but magical stories. The common theme being loneliness, it is the voice of life in big cities where existential loneliness dominates the culture.

Kalben will take part in this year’s festival, providing a night of music filled with her unique and awe-inspiring voice. Her style of purity and simplicity had the hearts of Turkish audiences for quite some time now and she continues to steadily expand her fanbase. The particularity of this concert is that it will bring together two artists: Kalben and the musician from Tel Aviv Dudu Tassa who also composed and arranged the song, ‘Şanssız Mücadeleci’ (Unlucky fighter) for Kalben.

Known for her delicate voice Deniz Tekin will be joined by Mehmet Ali Simayliwho can skillfully switch from one genre to another, and Portrait and a dream. The group’s debut album, Portrait and a Dream, released by Swiss label Unit Records, was named one of Bandcamp’s “Best Jazz Albums” and also endorsed by Jazz’n’More and Jazz Thing magazines. The historical and magical Opera Sureyya will host this exquisite night of music.

Evening with +1 is one of the most engaging events of the Istanbul Jazz Festival in recent years. The event will take place again this year in the form of a musical tour in different places on a Saturday evening, in Kadıköy. The first band to take the stage for the event is Ayyukawhich reflects the psychedelic spirit of the 1970s and draws inspiration from a wide range of sources ranging from Erkin Koray to Dick Dale. Dutch duo Yin Yin who combines disco and funk elements in an electronic universe while being influenced by the music of the 60s and 70s of Southeast Asia will perform solo and will also take the stage with Ayyuka. Then get ready to party with Hey! Douglas. Another important name this year Evening with +1 is Noisethe ingenious project of the Portuguese musician david santos, whose music resembles that of Yann Tiersen, Radiohead and Sigur Rós. You will only need one ticket to discover all the Evening with +1 events.

Jazz in the parks

Combining green and jazz, the festival jazz in the park concerts will invite audiences of all ages to different parks in Istanbul, totally free. Skinny Snorkel will bring the rich musical heritage of New Orleans to Istanbul with Baby Botticelli. The group brings together artists from different cities and cultures around the world. Before the band, there will be performances by local artists and Young Jazz+ finalists. Jazz in the parks concerts will take place at Habitat Park (Şişli), Beylikdüzü Yaşam Vadisi, Küçükçekmece Göl Kenarı Amphitheater, Göztepe Özgürlük Park (Kadıköy) and Sanatçılar Park (Beşiktaş). The concerts in Beşiktaş and Beylikdüzü are sponsored by the Goethe-Institut Istanbul and those of Şişli by United Nations Refugee Agency (UNHCR).

Its gentle dance with the piano keys unquestionably Enrico Pieranunzi apart from other pianists. With Renaissance sounds in his music and a skillful combination of jazz and classical, he fascinates audiences to this day. He will wait for his audience at the most magnificent Marmara Esma Sultan’s Mansion Monday, June 27 sponsored by Italian Institute of Culture.

The inspired virtuoso clarinetist Yom dedicated himself to exploring different musical aesthetics. Clarinet virtuoso Yom, who prioritizes exploring different worlds and the journey of the soul and how to reflect it through music, will take audiences on a journey of discovery to Cemal Reşit Rey Concert Hall. The event is sponsored by French Institute of Turkey.

Music in Turkey draws inspiration from both East and West, making it a “musical silk road” where influences flow in every direction. Showcase aims to present the current state of all these influences, with the best examples in different genres: jazz, rock, electronic music, ethnic sounds and global fusions.

In the sixth edition of Vitrin, Istanbul Jazz Festival invites a limited number of music professionals to attend the festival, as well as the festival audience. A limited number of vacancies will be open to applications from directors of international festivals, cultural institutes, booking agents, promoters, record companies, music journalists and radio producers from all over the world. International delegates will not only experience the showcases of some of Turkey’s top newest bands, but will also attend networking events, gain insight into Turkey’s vibrant music scene and meet key players in the local music industry. .

Festival tickets are available in price categories ranging from 700 TL to 10 TL (some events are free). Tickets can be purchased through passo.com.tr/en and Mobile pass app by creating an account or on IKSV ticket office. You can participate in events by presenting your PDF ticket, which is sent to your email address and also stored in the “my tickets” section of your profile page on the Passo website. The service charge is included in the ticket price.