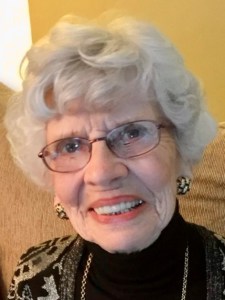 Jeanette Joséphine (Madness) Ophaug returned home to her Lord on May 31, 2022.

She was born in Geneva, MN, to Ole and Sena Folie on December 28, 1925, and lived on their 120-acre farm in Freeborn County with siblings Lucille and Stanley. She was baptized into the Norwegian Lutheran Church in Ellendale, MN, and was confirmed into the Geneva Danish Lutheran Church in Geneva. She loved her Danish and Norwegian heritage. She attended grades 1–8 in the one-room school in Lerdahl and graduated from Albert Lea Secondary School in 1943.

On her 21st birthday, Jeanette joined the Salem Lutheran Church where she was an active member of the Ladies’ Circle, Altar Guild and Women’s Bible Study Group and served as a teacher at the School of the sunday.

Other activities she has enjoyed include visiting isolations, delivering meals on wheels, and participating in Christian Women United and YMCA Y Menettes. She was a housewife to her children’s elementary school classes as well as a Cub Scout leader. When her niece, Susan, contracted meningitis as a baby, Jeanette became passionate about the deaf community and became involved with The Arc Minnesota for children with disabilities. She also solicited her neighborhood for donations to the Cancer Society each year.

First and foremost, Jeanette loved Jesus, and it showed in her compassion for others. She once wrote: “I have always loved people, probably more the underprivileged, the poor or the suffering. I always want to go further. It’s who I am. Even with dementia, her gift and caring spirit continued to show until the end. She was loved by many and left a legacy of faith and love.

Jeanette was devoted to her children and grandchildren and to the large “gang” of friends she and Lee had shared for decades. She was silly, friendly, kind, beautiful and welcoming. If you visited mid afternoon, she would be happy to put the coffee pot on and make a casserole or dessert anytime.

The family would like to thank the staff of Thorne Crest Senior Living Community and St. Croix Hospice for their tender and loving care during Jeanette’s final years.

A celebration of his life will be held at 11:00 a.m. on June 29 at the Salem Lutheran Church in Albert Lea with a visitation at 10:00 a.m. Interment will follow at Lakeview Cemetery. Arrangements by Bonnerup Funeral Services.