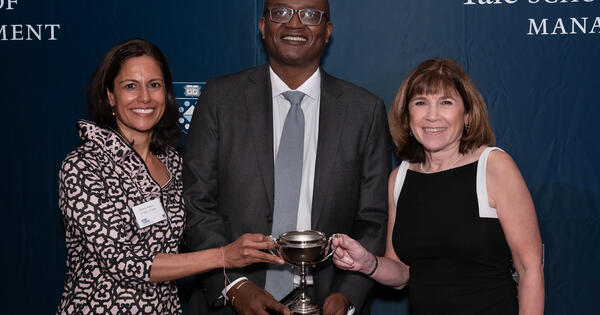 Members of the Yale SOM New York City Alumni Chapter gathered in Manhattan on Nov. 3 to honor the chapter’s 2022 Leadership in Business and Society Award recipients: Namrita Kapur ’97, joint graduate of Yale SOM and the Yale School of Environment and Andrea Levere ’83.

Kapur has had a long career in impact investing and philanthropy, with Adams, Harkness & Hill, Root Capital, the Environmental Defense Fund and the Eileen Rockefeller Family Foundation. She is a lecturer at Yale SOM and a resident scholar at the Yale Center for Business and the Environment.

Levere served as president of Prosperity Now, a national nonprofit that creates programs and advocates policies to reduce wealth inequality, for 15 years; she is now president emeritus. She is a member of the Yale SOM program on social enterprise.

Nik Khakee ’96, outgoing president of the New York City Alumni Chapter, presented the awards. He noted that the choice of winners arose from conversations with Professor Sharon Oster, former Yale SOM Dean, who died earlier this year. “I asked Sharon to guide me,” he said. “Andrea and Namrita were explicitly noted by Sharon as alumni she believed to be more than worthy of such recognition.”

“I can’t think of any higher honor, in terms of being a member of the Yale SOM community,” he added, “than being on Sharon’s top 10 list.”

Levere also evoked Oster’s memory while accepting the award. A pioneer as a professor and dean and in developing a rigorous curriculum in nonprofit management and philanthropy, she said, “Sharon was the rare leader who imagined a future that did not yet exist and then did it.

Inspired by Oster’s example, she said, “My love for the balance sheet has guided our strategy as [Prosperity Now] has piloted initiatives to increase the assets of low-income and households of color. We created a field that now spans nationwide…And everywhere I went, I met SOM alumni at work, using their skills to create new solutions to persistent disparities. We were doing what Sharon had taught us: creating a different future of financial security and wealth for all.

Kapur told fellow alumni that “this honor is more of a tribute to the SOM community and the mentorship and inspiration it has provided to me over the years – starting with Sharon Oster and, at the start, Ralph Earle ’84 and Ken Colburn ’78, and continues with current students and former alumni.

She remembers saying to a prospective student, “The SOM network is a group of smart, innovative, passionate and fun people. In short, they are your people. I thank the community for this wonderful honor, but more importantly, thank you for being my people!

In his remarks, Dean Kerwin K. Charles thanked the alumni for their continued commitment to Yale SOM and its mission. “What a great occasion for which we come together,” he said. “We come together to pay tribute to two alumni, Andrea and Namrita, whose careers epitomize everything we are and want to be. I am touched when I hear their stories.

He concluded with a toast to Oster, noting that the former dean was not just a great scholar and teacher, but a steward of Yale’s distinctive SOM approach. “Sharon helped remind the faculty always, often and out loud of what they were doing beyond writing papers and teaching at school,” he said. “We were engaged, she said, in this collective enterprise to do a special thing.”