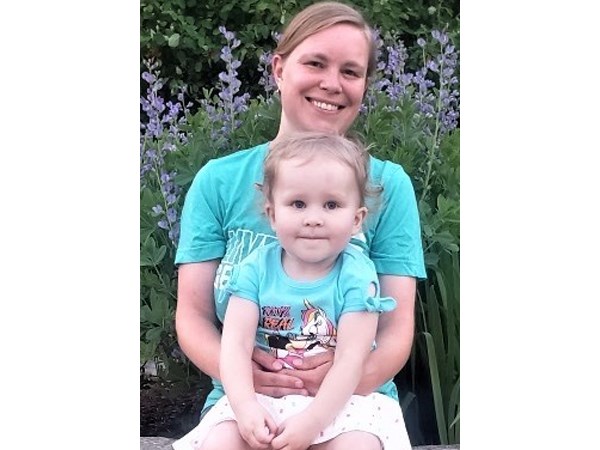 ROOT – David, Linda, Madeleine and Dominic Boman are devastated to announce the passing of our beloved daughter, sister, aunt, niece, devoted mother of Corinne, and wife.

Genevieve was born at Sinai Hospital in Detroit on October 6, 1987. As a premature baby, she had to fight to survive. She could not continue this fight on December 1, 2021, at the age of 34.

GeneviÃ¨ve and Adam were married on August 2, 2015 at the DeKoven Center in Racine. It was the wedding she had dreamed of having. They established their home in Lemont, Illinois.

She flourished in academia, always striving for excellence. She attended Racine Montessori School and graduated as Co-Major of Promotion from LycÃ©e Walden III in Racine. She received a BA with Honors in Physics from Worcester Polytechnic Institute, Worcester, Massachusetts, followed by an MA in Physics with Honors from the University of Leeds; Leeds, Great Britain.

At Racine Montessori School, there was a group of students who became known as the Five Friends. New friends came into his life in Walden and Worcester. These relationships brought him immense joy. You know who you are, just like us. At the Worcester Polytechnic Institute, GeneviÃ¨ve got involved in the protest against global warming. She was especially proud to have met and shook hands with her climate hero, Dr James Hansen, as well as many other students, being arrested during a protest while camping overnight on the Boston Common. Genevieve’s first month at the University of Leeds was spent atop a wet and windy Scottish mountain discovering and studying meteorological physics as it sank off the North Sea.

During her childhood, she traveled with her family to Italy, Spain and Switzerland. After graduating from Leeds, she continued her exploration, traveling through Western and Eastern Europe for several months, culminating in the climax of joining her mother in Paris, France. In Paris, she spent hours looking at works by Monet, participating in the cooking and touring extensively while dressed in a red beret. A restaurateur rejoices in her and teaches her how to wear the beret as a Parisian would.

GeneviÃ¨ve loved dance, especially ballet, especially Lac des Cygnes. She attended classes for many years at the Milwaukee School of Ballet and the Cashel-Dennehy School of Irish Dance. She started taking dance lessons at the age of four, going through high school and as best she could during her college days. We remember many hours and miles of traveling where she was in the backseat of the car having dinner and doing her homework on the way to a dance class. There have been many trips across the country to participate in Irish dance competitions.

Four years ago, GeneviÃ¨ve began her most important and tragically final role; mother of her only child, Corinne. She poured her soul into Corinne and the depth of her love for Corinne was immeasurable. Not every day and not everything she did was perfect. She was a first-time mother after all, but she was committed to becoming the mother she saw in her own mother. GeneviÃ¨ve was immersed in Corinne’s school activities. She was delighted to receive information from professionals at Corinne’s school and put strategies in place to help Corinne’s development. She and Corrine read, sang, danced, painted and learned new words. Walking outside along their special path was one of their routines. The end of the day was a highlight; GeneviÃ¨ve read goodnight stories and poems and sang her great-grandmother’s Italian goodnight song.

All the celebrations were important to her. She never forgot birthdays and loved our New Years celebrations at Villa d’Carlo. She was excited about the Dr. Who marathons and Frasier hysterics, dancing in the kitchen, heartfelt conversations, and crochet blankets for everyone. When selecting cards for occasions, she easily spent an hour or more examining them until she found the perfect card. She reveled in the words.

She was the sweetest, kindest, most caring and compassionate woman anyone could ever have the privilege of knowing. We will miss and honor GeneviÃ¨ve for the rest of our lives; take joy and comfort in the love and life that she brought to us during our time with her.

GeneviÃ¨ve was cremated and no official service is planned. Her remains will be taken to the homestead in northern Wisconsin where she will rest alongside her paternal grandparents, two aunts and the white pine that she planted as a child.

In remembrance of GeneviÃ¨ve, we ask you to perform a random act of kindness for someone who is suffering. Memorials for Genevieve are encouraged at your favorite charity or at Racine Montessori 2317 Howe Street or the Milwaukee Ballet. “Peace and long life.”

The first green of nature is gold,

its most difficult shade to hold

Its first leaf is a flower;

but only so an hour.

Then the leaf falls into a leaf.

So Eden sank into sorrow,

Then dawn comes down to day.

Nothing gold can stay.