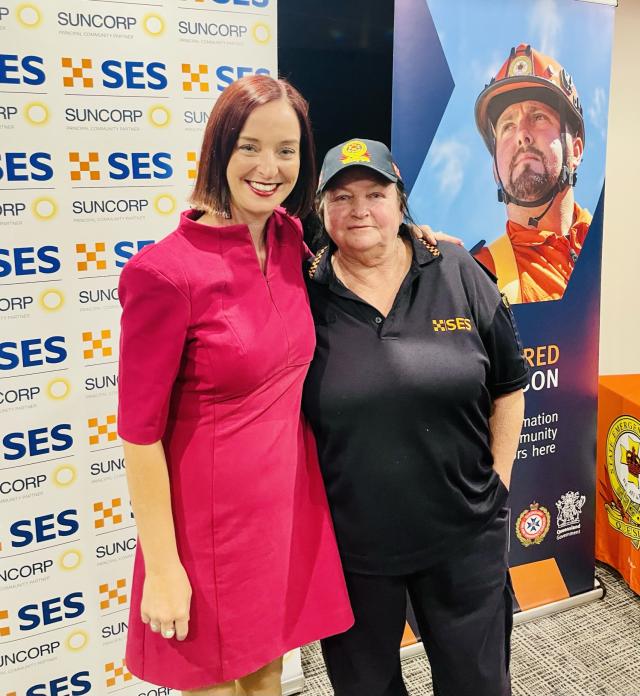 The future of the State Emergency Service in central Queensland is in good hands after the most outstanding volunteers were recognized during this SES week.

MP for Keppel Brittany Lauga congratulated the 723 volunteers from sixty-eight groups in the central region at the SES Week awards ceremony in Yeppoon this weekend.

The highlight of the event was the presentation of the Central Region SES Member of the Year award to Yeppoon SES volunteer Julie Palmer.

Ms. Lauga said the award was in recognition of Julie’s distinguished service through her steadfast leadership, dedication and commitment to the community.

“Julie is a role model for future leaders at SES,” she said.

“She is now automatically nominated for the Queensland Awards.

“SES volunteers have been out in force over the past 12 months, due to the prolonged rainy season earlier this year.

“When nature is at its worst, SES is at its best.

“SES volunteers not only contribute to their own community, but also to communities in Queensland and Australia.

“They show compassion for their neighbor no matter where they are.”

The regional SES Operational Response of the Year award went to Taroom SES Group for their outstanding efforts during the December 2021 flood.

Lynette Porter from Mt Morgan SES, Kim Newcombe from Yeppoon, Samantha Cranston from Rockhampton and Mark Trenow from the Marlborough Group have each won an SES regional award of the week.

Rockhampton band members Darrin Swadling and Chris Baartz each received the Commissioner’s Commendation for their efforts during the 2019 Townsville flood.

Adam Murrell of Yeppoon won a Regional Certificate of Appreciation and Robert Adcock of Taroom received a Meritorious Service Medal.

“From January 1, 2021 to July 31, 2022, the Livingstone SES unit provided 1075 hours of operational duties and 3955 hours of training, group exercises, fundraising and equipment maintenance.

“During the same period, Rockhampton SES spent 3,671 hours on operations and 9,659 hours on training, recruitment, equipment maintenance and fundraising.

“The Central Highlands SES unit provided 1367 hours of operational duties and 4443 hours of training and other duties.

“Our SES volunteers couldn’t do what they do without the support of their workplace and family.

“That’s why we celebrate them and their families and recognize those who have gone above and beyond.”