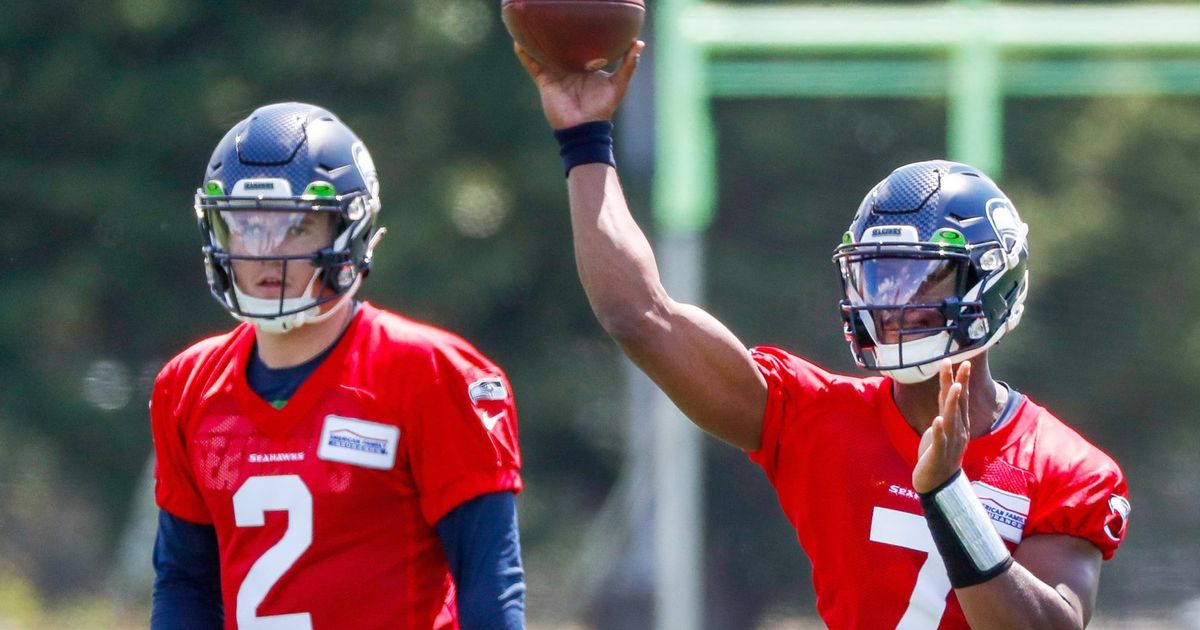 RENTON — The end of the Seahawks’ mandatory minicamp on Thursday also meant the conclusion of the most important part of their offseason schedule.

All that’s left is what coach Pete Carroll says will be a “passing camp” next week devoted primarily to younger players. Many veterans were free to leave town with the roughly two-month offseason program essentially done.

So where do things stand with the most important positional battle, the quarterback?

Pretty much where Carroll has described him all along – veteran Geno Smith is in the lead, but newcomer Drew Lock remains on his heels, nothing to be determined until August after a few pre-season games have been played, if applicable.

“They were awesome,” Carroll said of Smith and Lock. “They were really impressive. And it wasn’t a streak here or a day here. They’ve just been solid throughout.

This led Carroll to conclude, “We’re in good shape in this position.”

The true gauge of that statement, of course, won’t come until the fall, when regular season games are played.

And you probably wouldn’t expect the very positive Carroll to say anything else, especially given the bet the Seahawks took in March by trading Russell Wilson.

Carroll said Smith had “gone with the first group all along”, but added that he and Lock had alternated in “situational opportunities”.

The team said Smith earned the right to enter the offseason atop the depth chart because of his three years as Wilson’s backup and his play in three starts last season.

Carroll said the experience with the team and in the system of second-year offensive coordinator Shane Waldron — which Smith says is similar to the one he coached at West Virginia University — was evident.

“Geno has been there,” Carroll said. “You can tell. And he took full advantage of it.

But Carroll said Smith’s lead in the competition is far from insurmountable.

“Geno is still ahead, you can tell, but it won’t be too much for Drew to be caught,” Carroll said. “The time we spend [training] camp, he will be there. He is really brilliant. It makes sense to him. He’s really sharp in the huddle and on the line of scrimmage and all that. So it’s just the time he needs, and we can’t do anything but earn some more.

Carroll said he wouldn’t say how the team will split things up in the preseason — if the two QBs could take turns from all three preseason games.

But he said the team would do everything possible to keep the competition fair.

“It’s just wearing T-shirts and stuff here, so it’s not the real deal,” Carroll said. “…We’re just going to see what happens (at camp). The games are going to be important, and everything will be important.

But while trying to replace the best QB in franchise history can seem daunting, Carroll insisted he was looking forward to the challenge.

Carroll says Allen has no plans to sell

News last week that the NBA’s Portland Trail Blazers had received a written offer to buy from a group led by Nike founder Phil Knight has led to speculation about the Seahawks – both are owned by the Paul G. Allen Trust of which Allen’s sister, Jody, is the chair.

The Blazers attempted to quickly quell any rumors by issuing a statement stating that the team was not for sale.

Sources also told The Times that the Seahawks are not for sale and there is no indication they will be anytime soon.

Asked about the Blazers’ report and if he got any hints from Allen about the Seahawks’ future, Carroll reiterated that the team was not for sale.

“She never entertained that thought at all,” Carroll said. “I never heard her say that. I’m talking about our club, you know. I don’t know anything about the Trail Blazers. Fun to watch.”

206-515-5699 Where [email protected]; on Twitter: @bcondotta. Bob Condotta covers the Seahawks for the Seattle Times. He provides daily coverage of the team throughout the year.