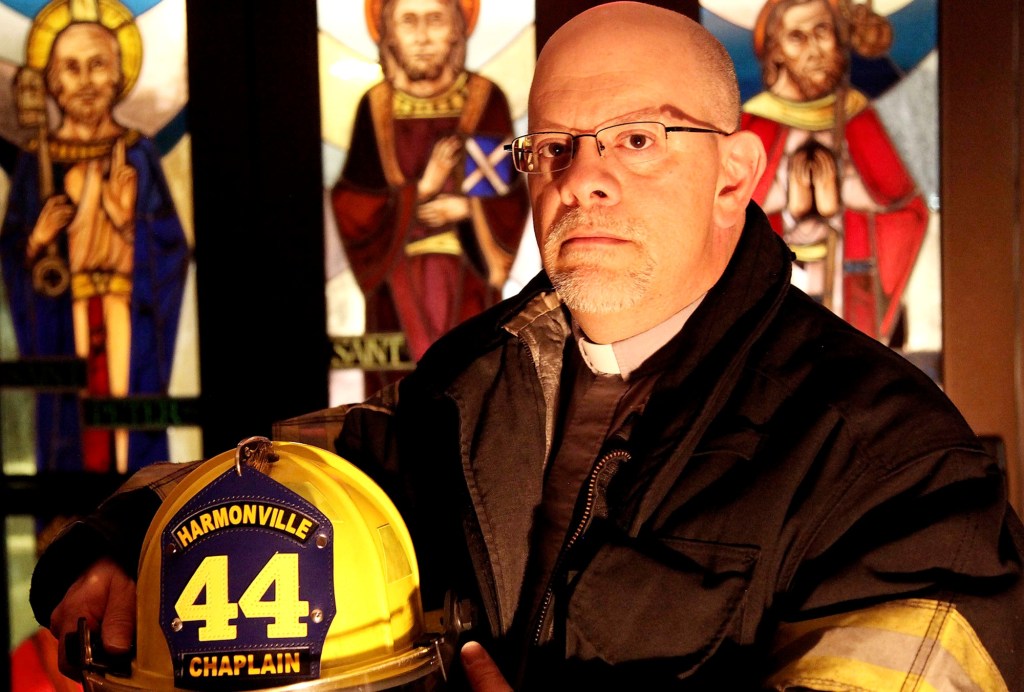 Fourteen years ago, James F. Behr, a longtime volunteer firefighter, past president and current trustee, had a vision for a chaplaincy program at Harmonville Fire Company.

“The company has always had a chaplain who blesses company banquets and dinners,” says Behr. Yet he saw a greater role for chaplains – providing pastoral care to firefighters and their families when they needed it most and to victims at the scenes of fires and traffic incidents.

It struck Behr that three of the Harmonville Fire Company’s longtime firefighters (serving between 30 and 45 years) would be perfect as volunteer chaplains. Scott Forsyth, 66, and John Haub, 55, are trained as evangelical lay leaders and Michael Pascarella, 61, is an ordained deacon in the Catholic Church.

In addition to their religious background, “all three,” Behr says, “are compassionate and easy to talk to.” They enthusiastically accepted and worked with Behr to launch the program. According to Behr, “the program was a gift.”

Behr and the three chaplains point to a tragedy in 2015 as illustrating the value of the program. A 19-year-old Harmonville firefighter, very active and highly respected in the community, was killed in a motorcycle accident. That night, Behr, then president of the company, heard the call and asked Pascarella to join him at Einstein Hospital.

Pascarella adds: “In the room, I sat with the mother and told her that I would be with her all night, and I was.”

“The chaplains,” Behr said, “continued their support for the next 5 or 6 days.” In addition to caring for the family, they offered prayer services, provided pastoral care, and enlisted the county’s trauma counselors for volunteers and the bereaved community.

When chaplains find out that a firefighter or family member is having a hard time — emotional, financial or physical — “we reach out and let them know they’re not alone,” says Haub. They provide “all that is necessary”: visiting the sick, planning funerals, leading prayer services, briefing service members and making recommendations.

Firefighters can also experience trauma on the job. Pascarella explains that “firefighters who volunteer for any length of time will encounter fatalities, including children.”

Chaplains have burning memories of the tragedies they each witnessed. Forsyth will always remember his first, responding to an apartment fire where children were killed. And that was 40 years ago.

Pascarella says: “When I saw the face of the 19-year-old firefighter who died in the motorcycle accident, he looked like one of my twin sons who were the same age. I had to leave the room momentarily. I collapsed against a wall. I dreamed of this kid for years.

Pascarella eventually learned that it was a symptom of post-traumatic stress disorder (PTSD) and turned to her faith to fix it. Such experiences are not uncommon for first responders.

As lifelong firefighters, chaplains understand the impact of these experiences like few others can. And that makes them uniquely qualified to support firefighters.

Although the chaplains have their own religious foundations, all three emphasized that their role is not to pass on their own beliefs or gain followers. According to Pascarella, “we’re here to meet people where they are and connect them to the resources they need.” Forsyth adds, “The most important thing we do is listen. Ninety percent of what we do is to listen. When you do that, people find their own way. He continues: “My faith calms me down and it is important for those I help.

Chaplains want more firefighters to call on them when needed. At many company meetings, Pascarella reminds firefighters that chaplains are there for them.

Many firefighters have “apprehension” about discussing their feelings, says Haub. “We create a space for them to express their emotions, to cry without others knowing.” Spending time at the station gave him the opportunity to informally check in with those in trouble, such as noticing those firefighters who, after witnessing tragedies, “just weren’t themselves.” same”.

Forsyth has been a firefighter at the station for 45 years and Pascarella and Haub for 30 years each. Over the years, they have all held leadership positions within the department. As they age, they are no longer active inside burning structures. Forsyth always attends fires and accident scenes and Pascarella does occasionally. Haub is currently not as active but is always ready to respond when called upon.

The chaplains have enjoyed their volunteer time with the Harmonville Company and feel that they have received as much as they have given. They recommend the company as an exceptional place to volunteer for those who plan to give back to their community.

For more information on volunteer opportunities, go to www.joinharmonville.org