The political balance of Twitter after the takeover of Musk 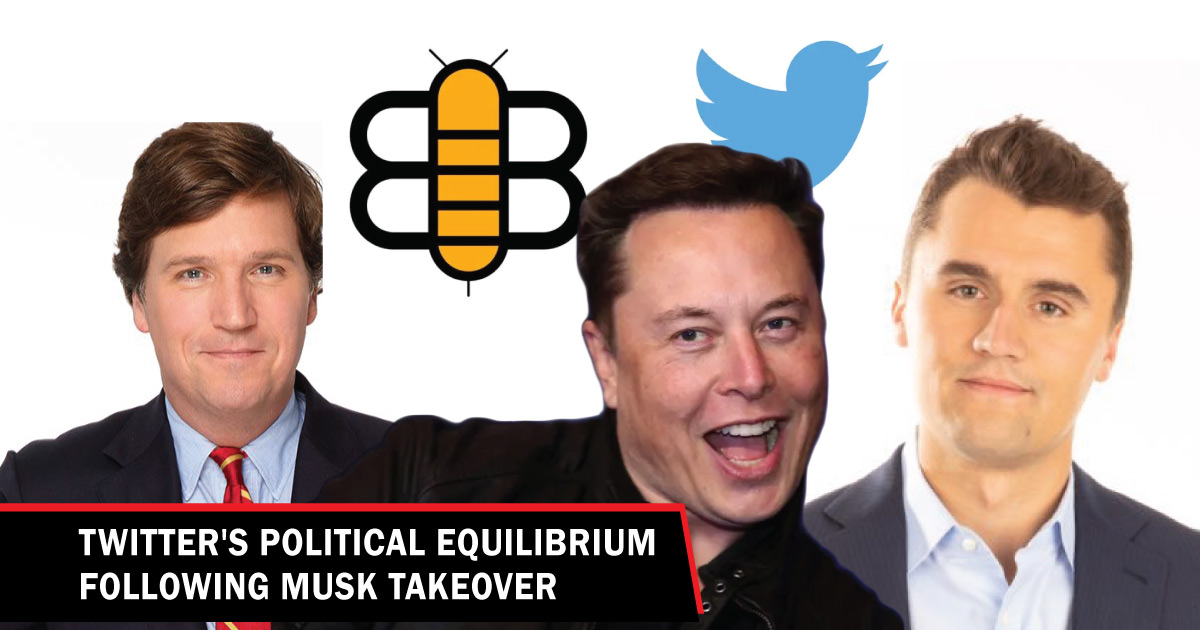 There was a major upheaval on Twitter after news broke yesterday that Elon Musk has reached a definitive agreement to buy the platform. The ‘byebyetwitter’ hashtag started trending as users apparently upset about the change in ownership began deleting their accounts, and news broke today that some left-wing leaders had lost thousands of followers.

On the other hand, many conservative figures on the platform have gained followers since the announcement. And while some users like Tucker Carlson returned to the platform just as Musk took the helm, their return was not caused by Twitter’s change in ownership.

It’s probably obvious to everyday Twitter users that the change in ownership has drawn mixed reviews, but whether or not it’s accurate to say that a significant portion of Americans, including those who aren’t on Twitter, are upset that Musk owns Twitter is debatable.

If it’s true that there have been enough tweets with the hashtag “goodbyetwitterto make it trend over the past couple of days, it’s hard to decipher what that says about the general American public, especially since each caption paired with the hashtag spreads a different grievance or trolls a different constituent.

In fact, analyzing social media activity to gauge how people feel about any topic yields inaccurate results, and a 2018 Hidden Tribes study explains why.

The study surveyed 8,000 Americans and identified 7 groups that shared the same beliefs and behaviors. Of these groups, the most extreme on the political right, the “devoted conservatives” made up only 6% of the population, while the most left-wing group, the “progressive activists”, made up only 8%. The study’s most startling revelation, however, found that members of these smaller, more extreme groups were the most active users on social media.

As American social psychologist Jonathan Haidt explains in his latest article in The Atlantic, “progressive activists were by far the most prolific group on social media: 70% had shared political content in the past year . Devoted Conservatives followed, at 56%.

So we can deduce from this data that the most vocal and extreme supporters, whether for or against the new owner of Twitter, do not accurately represent what most Americans feel. Despite that fact, it’s safe to assume that political YouTube channels and late-night talk shows will feature the most extreme reactions to this change in ownership in the coming days.

Fortunately, Harvard conducted a survey of nearly 2,000 registered voters just hours after the announcement of the Musk-Twitter deal, and while it’s not a very large sample, it’s always a better gauge of general public opinion on this than trying to synthesize every #byebyetwitter post.

The Harvard CAPS-Harris poll, published exclusively on The Hill, found that 57% of voters approved of Musk’s purchase of the platform, while 43% opposed it.

While these percentages reveal the sentiment of the general public, back on Twitter it seems many users are indeed leaving the platform, and it’s evident that the political left is bearing the brunt of these losses.

As Jonathan Haidt has noted, “progressive activists [are] by far the most prolific group on social media,” indicating that progressives may make up the largest share of active users on platforms like Twitter. It’s no surprise, then, that the same users who oppose Musk’s takeover continue their pledge to flee the platform.

Even more prominent politicians on the left suffered significant losses in their number of “supporters”. “[U]Sers like Michelle Obama, Bernie Sanders and Alexandria Ocasio-Cortez all lost over 10,000 subscribers overnight,” Fortune reports.

As a result of this one-sided exodus, users of conservative figures like Ted Cruz and Laura Ingraham have gained followers. In fact, the day after the Musk-Twitter deal, Senator Cruz gained more than 55,000 followers, according to social media analytics tracker SocialBlade. Musk himself gained over a million followers on the same day.

This dramatic shift seems less intense once the political leanings of Twitter’s userbase are factored in. According to a 2020 Pew Research study, 10% of users produce 92% of all US adult tweets, and of those highly prolific users, 69% are Democrats or Democratic-leaning independents. It could also explain why, outside of Twitter, the majority of Americans approve of Musk’s purchase of Twitter, as noted by the Harvard survey mentioned earlier.

As leftist figures lose the most followers, one could interpret that the majority of deleted accounts belong to progressive and democratic affiliates – a major caveat to this assumption being that it is currently unknown how many accounts deleted, if any, were robots.

But if further analysis finds that most users leaving Twitter identify as left-leaning or left-leaning, given data from Pew Research, that would indicate that the number of right-leaning and left-leaning users are simply balancing out.

Perhaps Twitter is experiencing a long-overdue balance of political voices, and perhaps the upcoming ‘Hidden Tribes’ study will reveal more even percentages between dedicated conservative and progressive activist users; time will tell us.

Thanks to the new ownership, I decided to come back! 😊

The accounts of other notable users like Babylon Bee and conservative radio talk show host Charlie Kirk were suspended along with Carlson for the same violation and also recently returned to Twitter. On April 25, Carlson simply tweeted: “We are back.”

Even though the reactivation of these accounts coincided with the announcement by Twitter’s board of directors accepting Musk’s offer, the two events are unrelated. Carlson and Kirk’s accounts had simply reached the end of their suspension periods.