Trump’s GOP: the party is further strengthening its ties with the former president 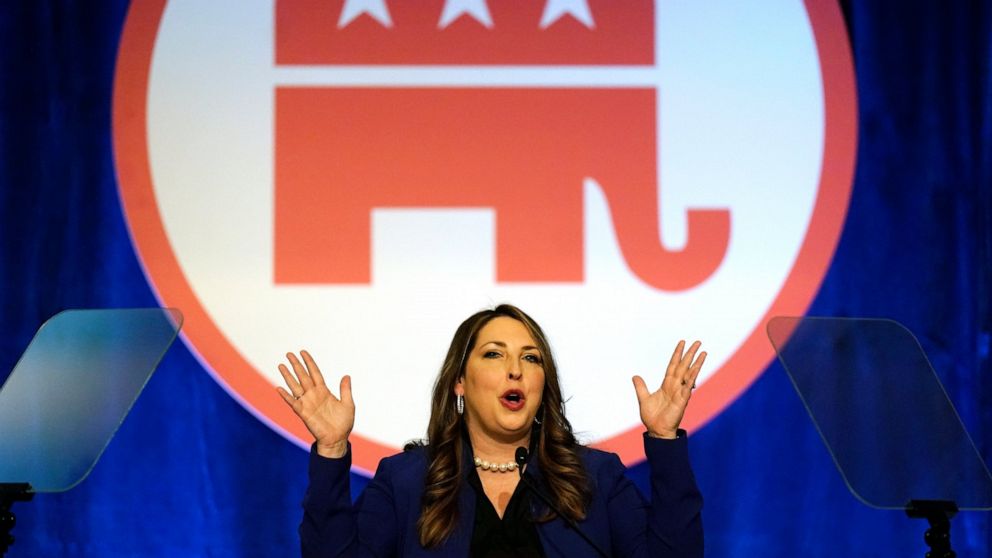 SALT LAKE CITY — In 2016, Donald Trump overtook the Republican National Committee with a shock and awe campaign that stunned party leaders. In 2020, the party was forced to support him as Republican incumbent president.

As 2024 approaches, however, the Republican Party has a choice.

The RNC, which controls party rules and infrastructure, has no obligation to back Trump again. In fact, GOP bylaws specifically require neutrality if more than one candidate is seeking the party’s presidential nomination.

But as Republican officials from across the country gathered in Utah this week for the RNC’s winter meeting, party leaders devoted considerable energy to disciplining Trump’s rivals and coming to terms with his grievances. As the early stages of the next presidential race take shape, their actions have made it clear that choosing to serve Trump and his political interests remains a priority for the party.

“If President Trump decides he’s running, the RNC absolutely needs to support him 100 percent,” said Michele Fiore, an RNC committee member who has represented Nevada since 2018. “We can change the bylaws.”

Loyalty to Trump is yet another reminder that one of America’s major political parties is deepening its alignment with a figure who is undermining the nation’s democratic principles. As he fought to stay in the White House, Trump sparked a violent insurrection on the US Capitol. More recently, he explicitly said former Vice President Mike Pence could and should have overturned the election results, something he had no power to do.

Away from the ballrooms of the RNC meeting, Pence chastised Trump on Friday, saying he had “no right to void the election” and that his former boss was “wrong” to suggest otherwise.

Pence is one of the few Republicans heading into a 2024 campaign whether or not Trump makes a comeback bid. If he were to run for the White House again, Trump is such a powerful force with the GOP base that he probably wouldn’t need party help to become the nominee.

Some Republicans said that was not the point.

“There’s probably some disagreement there,” said Bruce Hough, a longtime RNC member from Utah who lost to a Trump ally in a race for the party’s co-chairmanship last year. “The RNC must provide a level playing field for all presidential candidates. It’s our job. That’s what we have to do.

But a deep divide has emerged between veterans like Hough, who are dedicated to the GOP as an institution, and a broader group of Trump-aligned newcomers, who say they bring new energy to the party. Their main loyalty, however, seems to be to the former president.

“Before 2020, or most of the time Trump was in power, he sent his minions to populate the committee with people very loyal to Trump in many red states,” said Bill Palatucci, an RNC committee member from New York. Jersey and frequent criticism of Trump. “And they still benefit from this strong majority.”

The RNC’s continued endorsement of Trump more than two years before the 2024 election is a watershed shift from the party’s stance in previous elections.

In 2012 and 2016, for example, Reince Priebus, as president of the RNC, went to great lengths to ensure that each of the candidates was treated equally. The party sanctioned 12 debates, including early rounds that featured up to 17 candidates.

“Obviously there’s a bias that didn’t exist in the past,” said Tim Miller, who previously worked for the Republican National Committee and has since become a fierce critic of Trump. “It’s Trump coming out of there all the time.”

A year ago, just after President Joe Biden’s inauguration, RNC chairwoman Ronna McDaniel declined to encourage Trump to run again when asked, citing party rules that require the neutrality. She also discouraged attacks on Republicans who voted to impeach Trump.

This week, however, she backed an effort by Trump loyalists to censure Reps. Liz Cheney, R-Wyo., and Adam Kinzinger, R-Ill., a move triggered almost entirely by their struggle against Trump’s enduring influence. in the party beyond January 6, 2021, attack on the Capitol.

The censure, which was voted on Friday, says the two “support Democrat efforts to destroy President Trump more than they support winning back a Republican majority in 2022.”

McDaniel’s change coincides with the RNC’s reliance on Trump for fundraising. The party has launched hundreds of fundraising appeals since Trump left office citing his name. One offered this message to potential donors of small dollars on Tuesday: “YOU must stand with President Trump and YOUR party.”

In speeches given minutes before party leaders voted to censure Cheney and Kinzinger, McDaniel and co-chair Tommy Hicks failed to mention Trump and stressed the need to unify for the 2022 midterm elections. .

Although the committee’s decisions demonstrated sustained loyalty to the former president, outside of the winter meeting, the censorship was condemned by opponents as divisive and contrary to the leaders’ frequent calls to expand the tent of the left.

RNC discipline “shows more about them than it does about us,” Kinzinger said in an interview. “It shows that Trump and Trumpism have overtaken the RNC.”

Cheney, in a statement, said the move demonstrated how the party had become hostage to Trump.

Indeed, this week’s focus on debates that won’t take place until 2024 and anti-Trump Republicans has overshadowed the party’s preparations for the midterm elections. That’s notable because the GOP could regain control of at least one chamber of Congress and several governor’s mansions.

But this week, Trump’s grievances with his Republican critics took center stage.

Harmeet Dhillon, an RNC committee member from California, said it was imperative to send a clear message about Cheney and Kinzinger to her and the legions of volunteers working to elect Republicans this year.

“The midterm elections are about a party electing its leaders, and what Adam Kinzinger and Liz Cheney have done here is challenge their party leadership,” Dhillon said. “I don’t want to elect midterm people who do what those two did.”

Beyond censorship, Republicans set in motion a rule change rooted in another of Trump’s longstanding grievances. An advanced measure that would require presidential candidates to sign a pledge that they will not participate in any debates sponsored by the Commission on Advanced Presidential Debates. It is expected to be voted on when RNC members meet again in August.

“We don’t shy away from debates,” McDaniel said. “We are walking away from the Commission on Presidential Debates because it is a biased monopoly that does not serve the best interests of the American people.”

The eventual candidate of 2024 will however have the last word on his participation.

“The GOP I believe in is the party of freedom and truth,” the frequent Trump critic tweeted on Friday. “It is a sad day for my party – and for the country – when you are punished simply for speaking your beliefs, standing up for your principles and refusing to tell outright lies.”