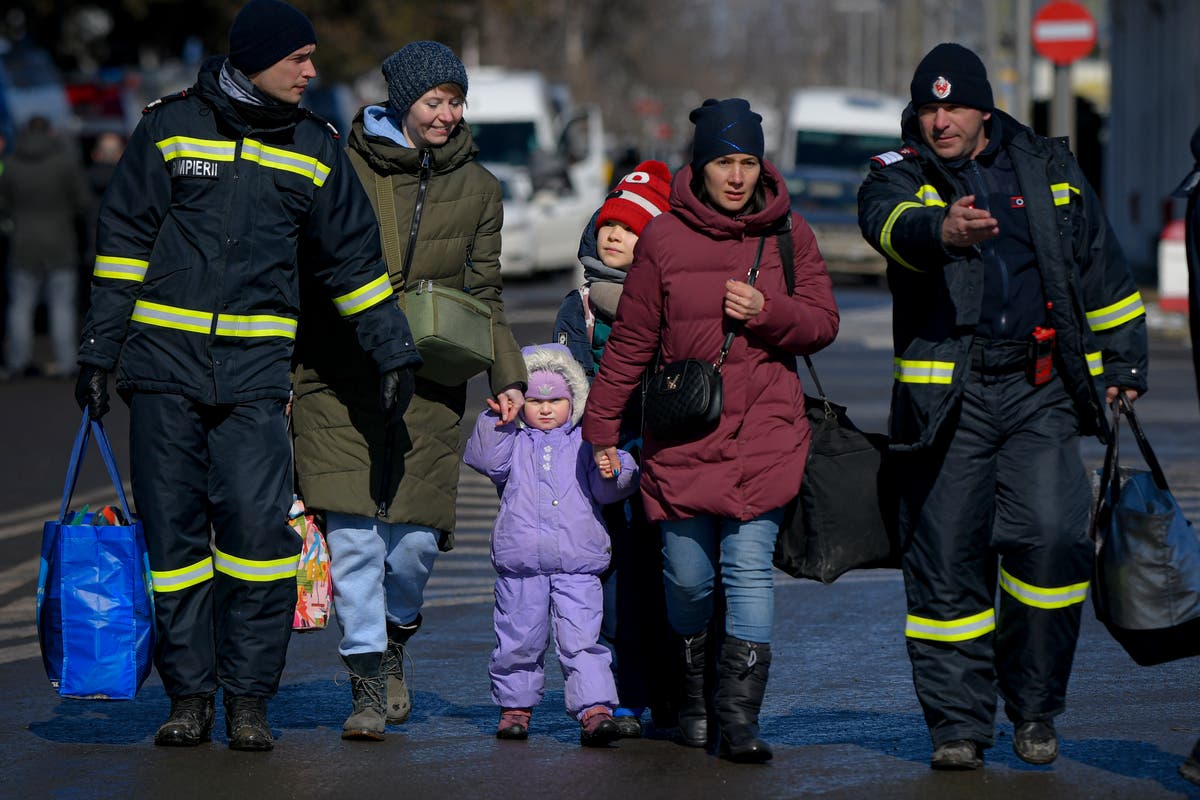 Refugee charities have said the government’s new sponsorship pathway for Ukrainian refugees is falling short of the response required, amid growing fears it is too ‘slow and cumbersome’ to do given the magnitude of the crisis.

Cabinet Minister Michael Gove said he hoped ‘tens of thousands’ would be able to use the route set to open this week as he announced local authorities would receive £10,000 per sponsored Ukrainian refugee in their region.

But opposition parties have said the scheme – which will also provide £350 a month to Britons who provide accommodation for Ukrainian refugees – is placing too much of a burden on the public and community groups.

The upgrading minister said he hoped individuals and community groups would be able to “partner” with refugees using social media, adding that charities would help in the process.

Labor warned that ‘too many questions remain unanswered’ about the new regime – and ridiculed its reliance on social media.

Shadow leveling minister Lisa Nandy told LBC: “We are asking people to ask to use social media as they flee a war zone. This is a serious crisis – this is not an online dating situation.

Labor leader Sir Keir Starmer claimed the government’s handling of refugees fleeing Ukraine was “far too slow, far too mean” and had been “an embarrassment to the UK”.

Questioning the lack of detail in the sponsorship plan, Sir Keir Starmer told Sky News: “What would comfort me more frankly is if I heard from Michael Gove that there were plans in place for support which will actually be needed upon arrival.”

The Refugee Council said ministers were still putting too many “bureaucratic obstacles” in the way of people at risk. Chief executive Enver Solomon said the new scheme “falls short” of what is needed and would “inevitably be limited to those known to people in the UK”.

Refugee Action’s Louise Calvey said the government was “tinkering at the margins” and had not put in place a “well resourced” program that addressed the scale of the refugee crisis currently enveloping Europe.

She said it was “really disappointing that we weren’t able to collaborate on the development of this program”, adding: “It worries me enormously… to evolve at this kind of pace in a safe and sustainable way”.

Mr Gove told Sky News the public could express interest in refugee accommodation when a new website is launched on Monday, and said he expects the first refugees using the road arrive in the UK “within a week”.

Asked how sponsors and refugees were supposed to come together, the minister told Sky News ‘ Sophy Ridge Sunday confirmed that the government thought they could try to link on Instagram or Twitter.

Sponsors will need to guarantee a minimum stay of six months – but will be encouraged to keep the offer as long as they can. People offering accommodation and applicants from Ukraine will be subject to security checks.

Sponsored refugees will be given 36 months leave to stay in the UK and will be entitled to work, benefits and public services.

Councilor James Jamieson, chairman of the Local Government Association, said the advice “will be essential in helping families settle into their communities”. He called on Mr Gove’s department to work closely with local leaders so the program “can grow at pace and scale”.

But Ms Sturgeon said she feared the UK sponsorship scheme was too ‘slow and cumbersome’ and not sustainable for how long people might need to stay in the UK.

Mr Gove revealed he was personally interested in housing someone from Ukraine, saying he was ‘exploring’ how to personally support those fleeing Russian forces.

Asked about the BBC Sunday morning program if he accepted someone, he said, “I’m exploring what I can do, I know there are others who have done it. Without going into my personal situation, there are a few things I need to sort out – but yes.

Mr Gove said on Sunday that ‘over 3,000 visas’ had now been issued to those fleeing war with their families in the UK, as the government came under fire for its failure to follow the EU’s approach EU and waive visa requirements.

Liberal Democrat leader Sir Ed Davey has said it is time for Boris Johnson to sack his Home Secretary Priti Patel for his department’s handling of the Ukraine refugee crisis.

“His inaction does not sit well with the British people, with all our compassion and generosity,” he told his party’s spring conference. “It couldn’t be clearer that Priti Patel is not up to the task. The responsibility lies with the Prime Minister. So Boris Johnson needs to fire her, now.

The Taoiseach said the state had so far accepted 5,500 people fleeing the Russian invasion, a response to what it called “the worst displacement of people since the Second World War”.

The Independent also raises funds for the people of Ukraine – if you would like to donate, please Click here for our GoFundMe page.

The Independent has a proud history of campaigning for the rights of the most vulnerable, and we launched our first campaign to welcome refugees during the war in Syria in 2015. Today, as we renew our campaign and launch this petition to Following the unfolding crisis in Ukraine, we are asking the government to go further and faster to ensure the delivery of aid. To learn more about our Welcome to Refugees campaign, Click here.