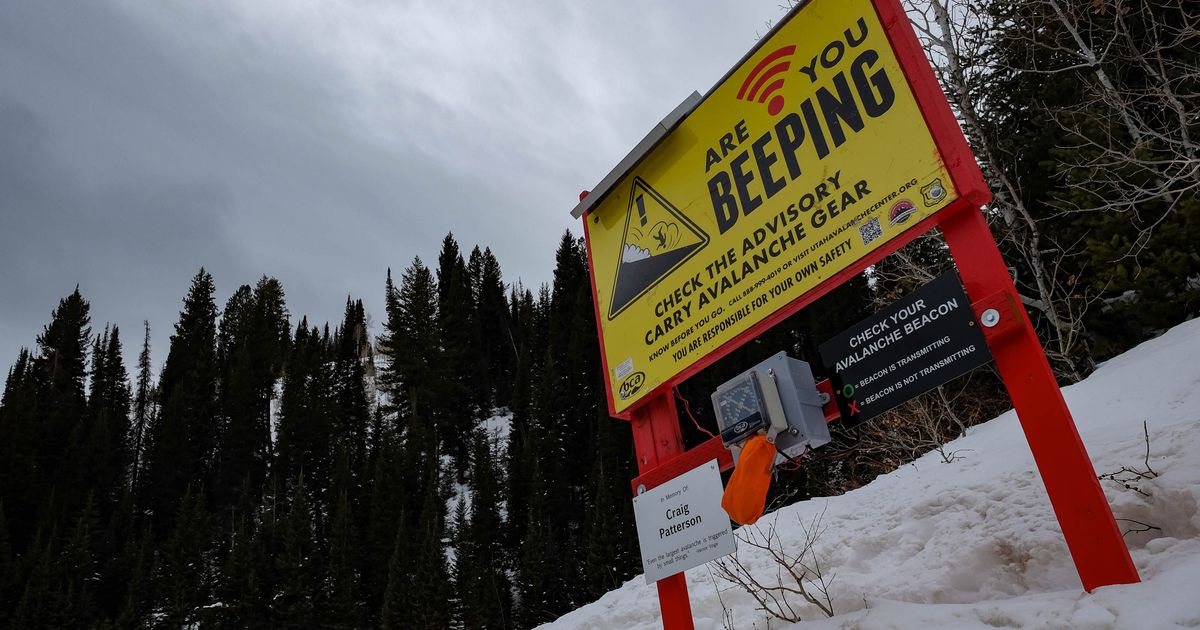 The video captures the slide he thought he could “off-ski”.

(Francisco Kjolseth | The Salt Lake Tribune) A sign lets cross-country skiers and snowboarders know their avalanche beacons are on and working before heading to the North Fork Trailhead in Big Cottonwood Canyon on Tuesday, February 9 2021. A skier was rescued from a slide in the canyon on Friday.

An off-piste skier escaped unscathed after being buried during a wild run in an avalanche on Friday in Big Cottonwood Canyon, thanks to the swift action of his fellow skiers, the Utah Avalanche Center reported.

After climbing to the top of a ridge in Silver Fork, the skier was the third in his group to descend an east-facing line known as “El Rollo” into the Meadow Falls when the snow cleared and carried the skier a short distance. , according to a report posted on the centre’s website. The funeral was captured on video accompanying the report.

With the late arrival of heavy snowfall in northern Utah, the avalanche risk increased. The center called it “considerable” across Wasatch.

“Today the crash is written all over the place,” forecaster Drew Hardesty wrote in Saturday’s forecast in all capital letters. Man-initiated landslides hundreds of feet in diameter and 2 to 4 feet in depth “are likely” on steep slopes trending northwest to east are predicted.

â€œAvalanches can be triggered from a distance, even hundreds of meters away,â€ Hardesty warned. â€œIt is also possible to trigger wind drifts and avalanches of loose fresh snow in the altitude bands. “

As of Saturday evening, no avalanche report had been posted on the centre’s web page dedicated to such reports. Friday’s crash was one of seven skier-triggered avalanches reported that day at the avalanche center. All were in Mill Creek and Big Cottonwood canyons.

In their report, forecasters thanked the rescued skier, identified only as Jon, for reporting the crash, giving them a full debrief and sharing the video clip of his capture.

“This information may save a life tomorrow,” wrote forecaster Trent Meisenheimer. The skier skied through avalanche terrain for 20 years without getting buried – until Friday.

The group of three skiers had toured the Meadows Chutes on Thursday and returned the next day to start enjoying the famous snow in downtown Wasatch again. At the top of El Rollo, they experienced a collapse of the snowpack, a sign of deep instability.

â€œEven though they knew the collapse was a bad sign, they continued with their plans. As soon as they started skiing in deep powder, they said they only thought about the quality of the ski, â€the report said. â€œJon had experience in the area but forgot how steep the breakthrough was.â€

About a third of the way down, his pitch suddenly changed. It was at this point in Jon’s run that a slab about 18 inches deep and 100 feet in diameter came loose.

â€œAbout two to three turns later I saw a fracture coming out of my left periphery,â€ said the skier in the middle. â€œI checked to the right and saw that it was spreading all around to my right. Thought I could ski out of the slide but as I reached the bottom half of the slope I got swept up by trees and hit my feet.

The moving snow dragged it through small trees and deposited it completely buried, but close enough to the surface that it could poke a hole in daylight.

â€œI cleared a hole for some air and started trying to get out of it,â€ he said. â€œDue to the depth of my feet and the fact that I had a ski still attached, I couldn’t get out of it. “

Jon’s two companions strapped their climbing skins to the bases of the skis and began searching for the missing man. They located him in less than 10 minutes and dug him up. The skier was not injured other than scratches and no outside help was required.