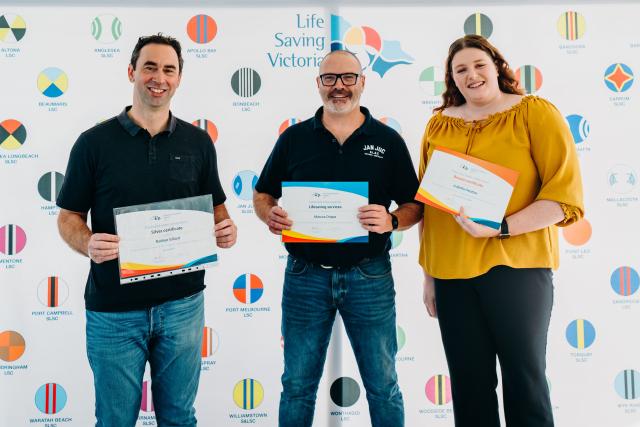 Life Saving Victoria (LSV) has recognized member volunteers from Geelong, Otway, Surf Coast and across Western Victoria for their outstanding achievements in operations, club services, development, training and sports during the 2021-22 season during a rewarding volunteer event.

The celebration, which was one of three regional events across the state, was held

at the Jan Juc Surf Life Saving Club on May 19 and was part of National Volunteer Week, an initiative of Volunteering Australia which recognizes the invaluable contributions of volunteers across the country.

This included the Gold, Silver and Bronze 100+ Hour Patrol Awards, which saw members rewarded for the 20% (Gold), 30% (Silver) and 50% (Bronze) of contributions from most important volunteer patrol during the season.

Western Victoria clubs contributed 54,649 of the state’s 169,164 patrol hours for the season, which equates to 2,227 days of patrolling the region’s beaches.

Apollo Bay SLSC club captain Calden Lyons, 22, was one of Victoria’s volunteers recognized in the gold category for his outstanding contribution during the 2021-22 season.

“I am extremely proud to have contributed to my club and the wider community, such as the school’s bronze camps in the 2021-22 season,” he said.

“For me, patrolling Apollo Bay every summer is a privilege, and it’s so rewarding to work with so many brilliant people and give back to the community.”

Mr. Lyons’ mother and sister, Evelyn and Tielle, were also recognized in the gold and bronze categories for their efforts between the flags this summer.

LSV caretaker chairman Adam Alsbury congratulated all of the West Victoria winners and thanked them for their efforts this season.

“It was wonderful to come together and celebrate the outstanding efforts of our volunteers and to hold our volunteer recognition event at Jan Juc SLSC to say thank you to all of them,” he said.

“LSV volunteers fulfill countless roles. From those in red and yellow patrolling the beach, the administration people working behind the scenes, the instructors encouraging the volunteers of the future, to those flipping sausages on the barbecue every weekend, we couldn’t not save lives every summer without the collective efforts of each of our 43,000 volunteers.

“Although winter marks a change from active patrols for our rescuers, many of them will continue their training, planning and involvement throughout the year, so we thank everyone for their continued dedication to saving Lives.”

Significant contribution of the rescue services:

Significant contribution to the training of volunteers: