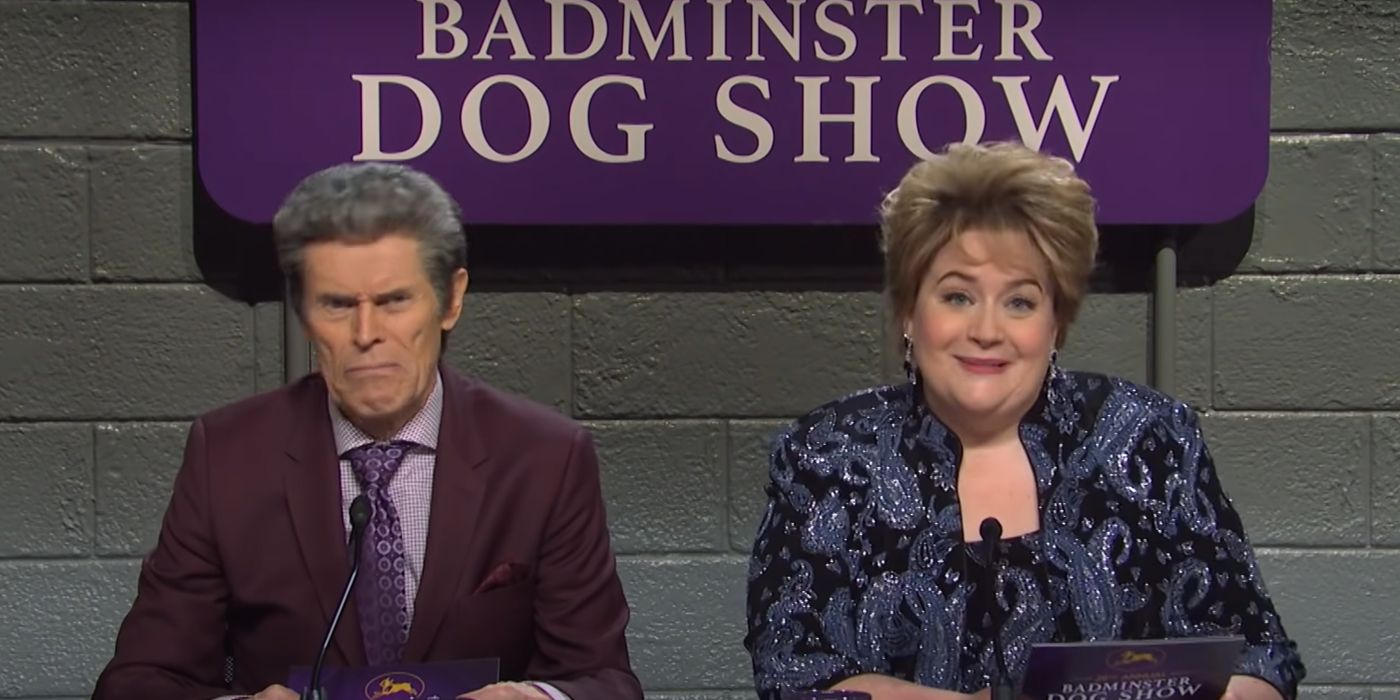 People will go out of their way to take care of their dogs. This Saturday Night Live The sketch highlights the weirdest dogs and the things owners do to appease them. A tour of the Westminster Dog Show, Willem Dafoe and Aidey Bryant host the Badminster Dog Show, sponsored by Thunder Shirt (like in the shirt you wrap your dog in to calm his anxiety during a thunderstorm). Live from the “Cujo Arena”, referencing the classic Stephen King A novel about a rabid dog, this canine show highlights those “canine monsters that prevent their owners from having company or intimacy”.

Dafoe and Bryant play the hilarious names of Judas Chrysler and Miriam Jeans, respectively, the show’s hosts. Kate McKinnon and Punkie Johnson are the Judges Bosworths, a couple who run a dog ranch who distinguish between animal rescue and hoarding situations. Each dog satirizes a different pet dog archetype, such as Luna of the “Shaky Dog Band” who is afraid of everything from plastic bags and pineapples to Netflix’s startup sound and, embarrassingly, “the sound spoken Spanish”. His owner (lemon balm Villasenor) notes that if Luna’s blanket isn’t inflated properly, she’ll cry real tears, before joking “my life is hell and I miss my friends”.

COLLIDER VIDEO OF THE DAY

Next, we meet Pigeon from the “nasty group”, who has been banned from all dog parks in Maryland. Although Dafoe and Bryant portray as manipulative and predatory, the dog playing Pigeon couldn’t pass up the opportunity to lick McKinnon’s face, nearly causing her to break the cuteness. Owner of the pigeon (Andrew Dismukes) explains that when he got Pigeon he was quiet, but it turns out “he was just traumatized” and now he’s missing “that version of him”. We also meet Blueberry from the “non-walking group”, a play about dogs who insist on being carried everywhere.

RELATED: ‘SNL’: Willem Dafoe Mocks His ‘Over the Top’ Acting in Monologue

The last dog, from the “medical group”, is Gizmo, a small dog dressed in a tutu and pushed in a stroller by his master (Chris Red), making fun of older dogs that owners push in specialized strollers. The judges ask about his “strange little dog penis”, which Redd says is bigger than his body and can get stuck outside his body for hours before being manually put back on by a vet, and that he “hate to say that and [he] says it a lot.” All the dogs gather to find that Gizmo has been awarded as the winner, who gets a little too excited at the end of the skit.

This sketch hilariously pokes fun at all dog owners who are a little too devoted to their pup, and it’s always great to see animals on SNL. You can watch the sketch below.

Fans can get an idea of ​​what to expect from the new trailer.

Sabrina Sternberg (she/her) is a news writer for Collider. Originally from New York, she now lives in Chicago. She graduated from the University of Chicago, with a double major in linguistics and film and media studies. Sabrina also has a background in theater and is very passionate about theme parks.