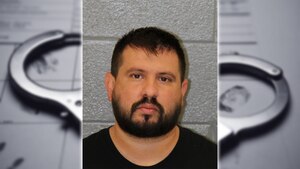 Police say a man who worked as a volunteer youth worker at several large churches in Charlotte has been charged with several sex crimes involving children at those churches.

Benjamin Damron, 36, is charged with nine counts of indecent liberty with a child and one count of sexual assault, Charlotte-Mecklenburg police said. Damron met all three victims in his role as a church youth leader, and police say he was accused of using his position to take advantage of and sexually assault several children.

At a Friday press conference, the CMPD said Damron was arrested at his home. They said the victims in the case were teenagers and that the charges against Damron in this case date back at least five years. The victims and their families knew Damron, investigators said, and Damron allegedly took the boys to his home and several parks to be abused.

One of the victims is over 15 years old, police added.

Police said they began investigating the case on Wednesday when they received two separate reports about the same suspect. They said they identified three possible victims and interviewed them at Pat’s Place Child Advocacy Center.

Damron’s Twitter account listed him as a drummer for Elevation. It was there that a source told Channel 9 that he met one of his accusers.

To the knowledge of the CMPD, Damron had no criminal history prior to these allegations, investigators said.

“We wanted to bring this information to the public because we think there are probably more casualties out there,” CMPD Lt. Jim Ivie said.

The alleged crimes occurred in Charlotte, Matthews and Union County, so CMPD detectives are working with law enforcement in those areas.

Channel 9 contacted each organization to find out what Damron’s role was, how many campuses he was affiliated with and what his current professional status was.

Police have asked anyone victimized by Damron to call Detective Brennan at 704-353-1940.

“I don’t know what prompted each child to come forward, but they are extremely brave to do so, and I applaud their bravery and that of their family,” Lt. Ivie said.

“We have been made aware of the worrying allegations made against a former part-time Soccer Shots manager. We are not aware of any allegations of inappropriate conduct or behavior affecting current or former Soccer Shots participants.

“The safety of all of our Soccer Shots participants is paramount and therefore all coaches must complete background checks and clearances in accordance with North Carolina law. These clearances for the former coach in question were completed prior to training with us and did not raise any adverse finding, allowing him to obtain employment.

“We understand the weight and the fear that this information can cause for parents. We are extremely saddened for the children and families affected.

This is a developing story. Check back for updates.

(WATCH BELOW: ‘What kind of message are we sending’: CMPD chief questions lower bail for sexual assault suspect)